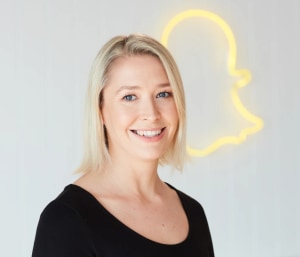 Snapchat’s long-term investment in augmented reality (AR) is paying off as uptake of the technology rises among consumers, particularly for online shopping.

According to a report from Deloitte Digital and Snap, more than 100 million consumers shop with AR online and in stores, with 94% of Snapchatters saying they’ll use AR the same or more when shopping next year. The report covered 15 markets including Australia, India, Japan, the UK, and the US and included 1,000 Australians aged 13-50.

On Snapchat, more than 200 million users engage with AR everyday on average, with a 40% year-on-year increase in daily engagement of AR Lenses for the first quarter.

Speaking to AdNews, Snap head of client partnerships Clare Nash says the rise in AR is taking the technology from “fun to functional” which is paying off for the business.

“We see AR as one of our biggest opportunities, the growth of our daily active AR users is outpacing our daily active user growth by more than 80% as people interact more with AR on Snapchat,” she says.

“Continued investment in our augmented reality and camera platforms engages consumers, and provides engaging options for brands to reach the Snapchat Generation.

“Our strategy is to take products like AR Lenses and evolve them into bigger platforms by building tools for creators, developers and the community. We've laid a foundation for this to happen across the App’s five main screens: Camera, Map, Chat, Stories and Spotlight.”

Developments in AR tools has made the technology more accessible to big and small brands which are increasingly adopting AR in their marketing campaigns.

The campaign achieved 1 million earned reach, 4 million impressions, was shared more than 108,000 times and had a brand recall of 33 points. Hundreds of pairs were purchased directly through the AR Lens.

“We have seen the interest and usage of AR increase significantly over the past year, with the Snapchat community embracing the ability to experience the world around them through the camera,” Nash says.

“As such, brands have shifted their investments to align with where their audience is. We have witnessed increased usage of AR as a way to connect with consumers at scale - and deliver efficient, effective advertising solutions.”