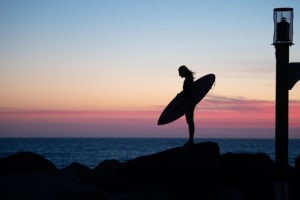 Ad spend in Australia hasn't fallen as much as many other key markets, according to analysis of media agency spend across the US, UK, New Zealand and Canada.

SMI (Standard Media Index) says sophisticated advertising markets are averaging a 28.2% fall in advertising spend in the first wave of the COVID-19 pandemic, according to data from March to the end of May.

James Fennessy, SMI's gobal CEO, says the one common factor was that all markets reported record ad spend falls over the three months.

"This global pandemic is having an impact on advertising markets which is far more severe than what we ever reported during the 2008/9 global financial crisis when the size of the year-on-year declines being reported each month never reached more than 16%," he says.

"So this has been an unfortunately unique experience given the sheer size of the ad spend declines being reported..

The largest three-month decline was in Canada where total national marketer ad spend fell 36.2% over the March-May period while the lowest decline was the UK where the total was back 21.9%. 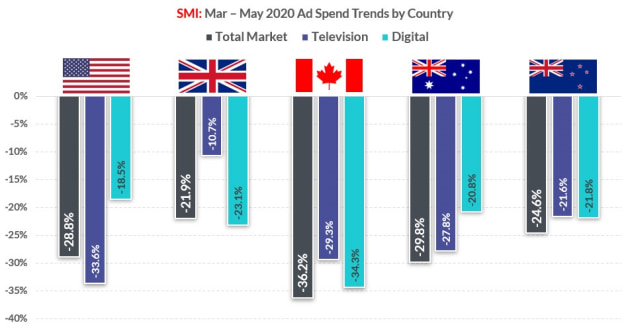 "The other similarity across each of these markets is that the TV and Digital media are the largest in terms of share of national marketer spending, but a key take-out from our analysis is that the levels of decline are not consistent despite these media featuring numerous global media groups,’’ he says.

Fennessy says the data highlighted the difficulty large advertisers and media companies have in tracking ad spend across multiple media markets as the trends varied by country.

"There are many aspects of the global media industry which are similar – for example some reality style TV content formats translate across markets – but it’s a very different situation when it comes to advertising as there’s no consistency on how product categories move spend across media verticals,’’ he says.

Insurance companies reduced their investment on US TV by 9.7% but in Australia they grew their TV investment by 3.1%.

"The data really highlights the degree to which these mostly large multinational corporates are tailoring their media investments according to the local markets,’’ he says.

The SMI data also shows a continuing decline in programmatic ad spend through this crisis in the US and Australian
markets.

But this form of digital advertising is continuing to grow share in the UK and NZ digital media.

In Australia, NZ and the UK, technology-related categories if ad spend grew.

In the US, the pharmaceutical category was the only significant market to report higher media investment.

"In every market, the loss of such a vibrant category has severely impacted many media," Fennessy says.

But there is good news.

SMI’s data in all countries showing strengthening advertising demand in June with the US emerging as one of the best performing markets with the value of ad spend falling just 20%.

"The key message here is that the advertising markets are moving off the bottom and are beginning to rebuild," he says.