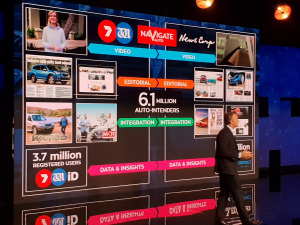 Kurt Burnette at the Seven Allfronts

A new deal with News Corp to disrupt the car advertising market, a dedicated food channel, a slew of new local and international content and the broadcast rights to one of Australia's largest cycling events lead the top stories for Seven West Media's (SWM) Allfronts event.

As the network looks to boost its advertising reach in an increasingly fragmented market, SWM will enter a partnership with News Corp to launch a marketing platform designed at targeting Australia's automotive market, 'Navigate Auto'.

In market next week, Navigate Auto will combine both SWM's and News' research and data to give audience and customer insights to advertisers targeting car buyers.

SWM claims the new platform will reach a combined 6.1 million car buyers, covering 95% of the market.

“We know that 98% of auto intenders are engaging with lifestyle and news content regularly, so by drawing on the combined scale and might of SWM and News’ insights, data, creativity, talent, media brands and reach, we will work side by side with our advertising partners to supercharge their existing brand creative and messaging," SWM chief revenue officer Kurt Burnette says.

“Make no mistake, this will change the game. A fully integrated bespoke offering, across all touchpoints, to help consumers navigate the path to purchase.”

Seven will also create a "talent-fronted" video and information content offering that will include opinions and reviews from both Seven and News' lifestyle and motoring teams.

The number of Navigate Auto packages will be limited across the year, with video, editorial, and product placement creative featuring across all of SWM's and News' key broadcast, print, broadcast video on demand (BVOD), digital and social platforms.

"Our customers will sit at the heart of Navigate and we can’t wait to start working with Seven on a range of exciting initiatives and projects.”

As part of its plan to increase investment in the growing food and lifestyle category, SWM will also partner with Discovery to launch a new multi-channel, 7food, going to air 1 December.

The 24/7 food channel will include a large some of the content from Discovery's Food Network, as well as domestic and international programming, such as previous seasons of My Kitchen Rules (MKR), Zumbo's Just Desserts and My France with Manu.

SBS originally held a three year deal with Discovery but Seven has since taken over the agreement which ended last month. SBS will continue with its own food channel, which is to be rebranded as SBS Food, but will no longer have access to the international content it previously broadcasted.

"Leveraging the power of Seven, combined with the strength of the number one women’s digital network, Pacific, plus West Australian Newspapers, means we will be launching with a bang," Seven network sales director Natalie Harvey says.

"I don’t believe there has ever been, or will ever be a better platform and better timing to launch such a rich and engaging content platform.”

Seven is yet to reveal the original content it has planned for the 7food network but confirmed it will be announced shortly.

SWM says it will continue to push for a greater market share in the drama category, announcing several new Australian and internationally produced series, as the 10th year of MKR and the launch and revamping of several reality programs.

Alongside the return of MKR, Australian television producer, comedian and presenter Andrew Denton will be back on TV screens after five years with a new interview program focus on "inspiring conversations".

The first series includes the story of Magda Szubanski, Guy Pearce, kidnap survivor Amanda Lindhout, and life of Rebecca Sharrock, a woman who can remember every day of her life.

Between Two Worlds - Seven Studios production and from Australian creator/writer Bevan Lee (Packed to the Rafters, A Place To Call Home and All Saints), comes a new drama series about two disparate and disconnected worlds, thrown together by death and a sacrifice.

Secret Bridesmaids' Business - The lives of three friends are inextricably changed when one of them unwittingly invites a malevolent stranger into their world. A tangle of lies and laughter collides with a stalker’s chilling obsession.

Extreme Weddings - Extreme locations, extreme themes, extreme expenses – Seven will be there from the initial planning stages through to the big day in a brand new reality show.

The Proposal - From the creator of The Bachelor comes a new dating show. Each episode, 10 eligible daters compete in four pageant style rounds to win the heart of a mystery suitor or suitress whose identity is concealed from them.

Seven is making a multimillion-dollar publishing play to compete with nine.com.au launching a new online home in 2019 - 7News.com.au.

A standalone online news service, 7News.com.au will debut in the first quarter of 2019 across desktop and mobile, with integration into major third-party news aggregators, such as Sunrise, The Morning Show and Sunday Night.

It comes as SWM began the process of taking control of its digital products and the recent split from Yahoo.

SWM also revealed it has signed a new multi-year agreement with the South Australian Tourism Commission to broadcast and stream Australia’s Greatest Cycling Race, the Santos Tour Down Under (TDU).

While the exact timings of the broadcasts have not been made available, the strategy is similar to the previous deal Nine had to broadcast the TDU throughout the summer of cricket.

Nine held the rights to the race up until this year, which also coincided with the network losing the rights to domestic cricket to Seven and Foxtel.

“The TDU will be a valuable addition to our unrivaled stable of world-class sporting events, that have helped deliver our 12th consecutive year as Australia’s most-watched network," SWM chief executive Tim Worner says.

“We’re looking forward to giving the TDU the 7 treatment and delivering the best and most exciting coverage of the TDU ever seen and, as with all our sport, it will be free for all Australians.”

The 2019 Santos Tour Down Under commences on 10 January with the Santos Women’s Tour Down Under, running until 13 January, followed by the men’s race from 15 to 20 January.

Cricket, AFL, racing, golf, NFL and its latest addition, The Tour Down Under cycling race, Seven reveals its sporting strategy for 2019. #7Allfronts pic.twitter.com/8MAZM3xRRe

Seven Network will for the first time screen and stream over 3500 hours of coverage from the 2020 Tokyo Olympic Games across 52 live event streams and numerous Ultra High Definition live channels.

Furthermore, Seven announced that, during the Games, it will be the first Australian media company to host an 8K Ultra High Definition live sport site screening.

"Seven promises that the Tokyo 2020 Olympic Games will be the biggest ever, bigger than Sydney 2000," Burnette says. #7Allfronts pic.twitter.com/hPgMPkmfhd