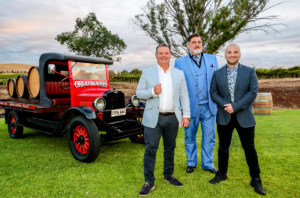 South Australian Tourism's partnership with MasterChef has set a benchmark for all future integrations for the tourism body, executive director of marketing Brent Hill says.

The 'South Australia week' integration took its budding cooks to key areas of the region such as McLaren Vale and top wineries including d'Arenberg and Jacob's Creek. The moves were all part of South Australian Tourism's mission to reposition the state and boost appeal.

As a result, Hill says appeal seems to have rocketed and thousands of business leads, clicks and bookings have been generated which went beyond his "wildest dreams".

With a national average audience of roughly 1.1 million viewers this year, MasterChef Australia continued to tap into food-frenzied consumers this, which Hill says provided the opportunity to reignite tourist interest in the state's growing food and drink industry.

Hill says the mission was to target the 25-54 demographic across Sydney, Melbourne and Brisbane.

He says the state was looking to move away from its previous position as a "setting-based" TV opportunity, with many shows using the location as a backdrop, rather than engaging with what it has to offer.

From there, Hill and his team approached Ten to launch South Australia week. The week-long special event saw the contestants visit wineries, restaurants and use fresh produce from across the state.

"We found that we were indexing really nicely on certain parts, particularly parts like wineries and wine and so on and increasingly so on food, but we wanted to keep pushing the envelope," Hill says.

"Then we looked at it and thought MasterChef is a really large reaching program and people really value it and believe it's a credible voice."

The results were immediate with the MasterChef campaign page created by SA Tourism reaching 40,000 clicks and generating close to 1000 leads for local food and drink operators.

"We had people like d'arenberg Cube come back to us and say they had over 2,500 enquiries for bookings in that same week and then one of the places up in the Adelaide Hills whose website crashed," Hill says.

Working with Havas-owned Red Agency, Hill says SA Tourism has now set a "new benchmark" for product integration, with the organisation continuing its work with MasterChef judge Gary Mehigan later in the year.

In the coming months, MasterChef chef Gary Mehigan will be involved with a traveling South Australian food bus that will drive commuters home while the chef provides them with a food and wine tasting experience.

"The main thing is from our perspective is ... gone are the days where you just go, 'let's pay heaps of money and get that show to come here'," Hill says.