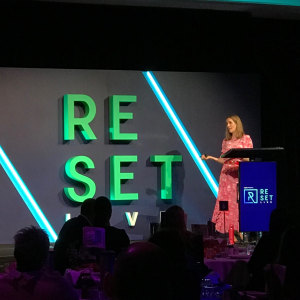 MECCA founder and co-CEO Jo Horgan says the most powerful marketing lever for the cosmetics retailer has been its customer service.

Speaking at the Australian Association of National Advertisers’ (AANA) conference RESET, Horgan says the company has not traditionally advertised and instead relies on its team members who are “indoctrinated” in the Japanese concept of service omotenashi.

“It’s all about doing the wrong thing for the right reason so that customers always gets what they want,” Horgan says.

“We truly believe that the most powerful marketing lever we have is our customer service and services.

The company has a Net Promoter Score of 78 versus the industry average of 38 and maintained double digit growth during COVID despite having to close its brick and mortar stores briefly during the lockdowns - all thanks to its engaged audience.

This success leads back to MECCA’s marketing strategy which sees it put customers at the centre of its business.

Horgan says its biggest unique selling proposition is its staff.

During the COVID lockdowns, she says the business launched a number of education initiatives for the team including MECCAversity where over 140,000 hours of learning was completed.

“We see MECCA Beauty Loop as the ultimate love club - it’s what we call it internally,” she says.

“It really has built a community of phenomenally passionate and engaged beauty customers who then share reams of data with us and that’s enabled us to personalise the experience as this lovely virtuous circle.”

This then carries through to all the events MECCA does, including the “Coachella” for 15,000 beauty fanatics MECCALand held in Melbourne and Sydney, which has garnered over 180 million impressions at each event.

She says this event was a great example of “not asking” the customer what they want.

“We felt it was our responsibility to dream that all up and think how can we delight and surprise our customers in a way they couldn’t imagine themselves,” she says.

“All of these things wrapped up together means that we have this incredible MECCA community and the sales have followed from that without pulling any of the usual levers of discounting or advertising or team member incentives.”