Q&A: Elle editor on what makes an award winning cover 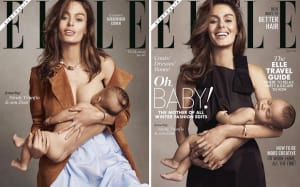 Elle magazine took home the trophy for the Cover of The Year at the 2015 Australian Magazine Awards (AMA). The dual cover made headlines globally for its risqué but iconic inclusion of supermodel Nicole Trunfio breastfeeding her son.

The AMAs recognise best in class magazine brands, editors, marketing and more. Entries close next week, on the 23 September.

While the breastfeeding version was only available to subscribers, it still sparked a global social media frenzy and thrust the topic into the spotlight.

At the time, Elle editor Justine Cullen said she was surprised by reactions to the cover. Below, we speak to Cullen about why she believes the Elle cover reigned supreme at the AMAs.

Justine Cullen taking home the trophy at the AMAs in 2015

What does it take to make an award winning cover?

Who knows? Magic dust? My favourite covers are always the ones that ask questions or start conversations, but obviously if it was possible to know what will do that in advance we’d all be doing it every single issue. The impact of tip-ons in our market means that sadly the quality of the cover matters less to sales, but because of social media it’s never been more important as a marketing tool.

What decisions go into choosing the cover? What are the considerations?

Talent is of course the biggest factor, but timeliness and brand message are so important, and for a fashion magazine we also need to take into account the season we’re shooting and who would suit the designers we want to feature. More and more a talent’s social following matters. It’s a jigsaw puzzle.

It was quite a confronting cover that had two variations - why?

I still don’t see how it was considered confronting - you see more breast in a bikini! The decision to run it as a subscriber only cover was really about the fact that as a fashion magazine it didn’t necessarily represent our core proposition. The fashion image in the beautiful Prada dress was the classic cover shot we had always intended to run, the breastfeeding shot was a beautiful moment that was captured by our photographer Georges that, when we saw it, we thought would make a gorgeous cover as a bonus to our most engaged readers - never the cover itself.

What was the response?

Huge. I don’t think there was a pop culture website around the world that didn’t run a story about it. We made television news all over the world, including the US. Not many Australian covers (if any) can say that. Of course there were the people who wanted to hate on the fact that it was a subscriber cover only, but they were in the minority and the response from women and the breastfeeding community was astoundingly supportive and grateful.

How did it impact sales?

It was a subscriber only cover so it wasn’t possible for it to impact sales, but the PR we got from the execution made it a huge success in our eyes.

How did advertisers respond?

All our advertisers respond very positively when we run more creative, out-of-the-box covers (such as the mirror, Mick Fanning and mix-and-match executions), it makes them feel confident that print can still create a buzz and start a conversation and that’s something they all want to be a part of.

Dont miss out - Get your entries in now for the 2016 Australian Magazine Awards.