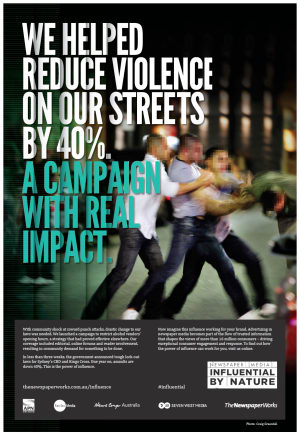 The biggest newspaper publishers in Australia have come together to launch a major campaign that aims to highlight the influential nature of newspaper brands, raise the profile of newspapers among advertisers and reverse the decline of ad spend.

The campaign, created by The Hallway, is understood to be worth five million dollars and uses both print and digital assets to highlight examples of newspapers campaigning that have achieved tangible outcomes for both the community and for advertisers.

The Newspaper Works Chairman and CEO of APN News & Media, Michael Miller told AdNews the campaign has been in the works since the end of last year and aims to boost newspaper brand’s overall share of advertising dollars. The aim is to encourage advertisers to divert ad spend back to the medium after a continued period of declining ad revenue, he said.

According to the February SMI figures spend in newspaper media dropped by double-digits, falling 14.2% and Miller said that one indicator for success of this campaign is stopping the trend that newspaper media is currently on.

“In many ways other industry bodies have been more proactive. Newspapers as individual papers have marketed well, but the category has a challenge,” Miller said. “It’s not about market share between , it’s about a category challenge so it’s appropriate that it’s a category response,” he said.

That said, it’s down to each publisher to galvanise sales teams to leverage the campaign and turn conversations about it into revenue, he added.

The first execution, which launches today (13 April), shows how a newspaper media campaign aimed at reducing the incidence of alcohol-fuelled violence on Sydney’s streets resulted in a 40% reduction in violent assaults – making the point if newspapers can be influential on social change and impacting policy, advertising in newspapers can have similarly impressive effects for companies.

Miller told AdNews that the positioning around newspapers being influential isn’t a new one, however he said that over the last few years that message has been forgotten.

“Newspaper media doesn’t have an audience challenge, we have a commercial challenge,” he said.

“There’s definitely a lot of competition out there and that makes it tough for marketers. In 2015 you can’t choose one media and get the result. It’s all about how that media works together and what role newspapers have. We need to educate about that, to help others make the right decisions.”

The campaign kicks off today and all the publishers will be using both their owned and paid assets with ads running both online and in print. The Influential by Nature campaign will also run in the trade press.

Miller explained that "momentum builds momentum" and so the campaign is set to continue for a sustained period of time, and form the basis of a multi-year strategy for The Newspaper Works.

“I don’t see this as being a campaign with a definite ending, it’s not a new positioning, it’s a reinstated positioning,” he said. “I would see this as a campaign that evolves [as we see] the influence it has for consumers and advertisers. It’s also a resource for sales teams to work from and it’s a rallying point for editors and journalists.”

As part of the broader campaign, The Newspaper Works and AdNews have partnered to run a series of profile pieces on influential industry figures. It will kick off in the 1 May print edition.