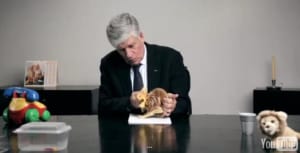 Publicis Groupe's Maurice Levy passes the time during a pause in his end of year message.

Outlining its first quarter results overnight, Publicis Groupe global CEO Maurice Levy said the kickback saga raging in the US had taken its toll on the industry, but said it would refuse to formally weigh into the issue.

“We are not participating in this debate,” Levy told investors.

“All our clients have the possibility of auditing the numbers. Our numbers have been regularly audited and we are participating in the audit very collaboratively, and until now nothing has been found.

“Publicis is extremely rigorous in the way we are handling the contracts of our clients. We feel responsible for them and we are committed to transparency.”

Former MediaCom chief executive Jon Mandel dropped a bomb on the US industry in early March by suggesting that kickbacks, whether it be in the form of cash, reduced rates, or free inventory, was commonplace within the industry.

The issue has also raged in Australia, with the first three months of the year dominated by the news of GroupM agency MediaCom's misreporting of TV campaigns found the misuse of so-called 'value banks', that it was monetised instead of passing the savings onto clients, and the resulting EY audit.

However, while Levy told investors that it would maintain a silence on the issues, this didn't extend to a post-results chat with analysts.

“Most of our clients know exactly what our practices are. They know that we are extremely rigorous and that we are playing by the rules,” Levy was quoted as saying by the Wall Street Journal.

“So we are suffering as an industry because there has been a lot of noise which has been made by a former media commentary.”

Publicis brought in €2.1 billion euros ($2.9 billion) in revenue in the quarter to 31 March, an uplift of 31.7% compared to the previous corresponding period.

However, most of this was the acquisition of Sapient and the positive effect of currency exchange during the period.

Excluding the Sapient acquisition and currency fluctuations, it reported revenue growth of 0.9% year on year.

It also reported that it had recorded more than 5% revenue growth from its Australian operations, although an exact figure was not disclosed.

The group also forecast a 4.4% uplift in media spend worldwide in 2015, predicting the UK and China as the hotspots.