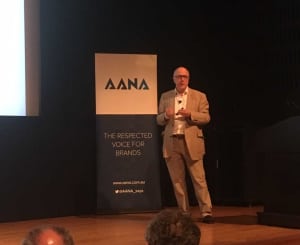 Programmatic media is ineffective and doesn't deliver returns for advertisers as only 20% of the spend reaches the consumer, was one of the revelations that shocked advertisers at the AANA transparency event yesterday (21 March).

Nick Manning, chief strategy officer of Ebiquity, gave a brutal assessment of programmatic media and its role in the digital media supply chain and described it as “the biggest problem in the industry”.

“[Programmatic spend] is the biggest problem we have in the industry right now in terms of wastage and inefficiency. The point is that programmatic isn't working terribly well, we believe, but nevertheless money is gushing into programmatic even though it's inefficient," he says.

“You, as advertisers, have to understand how you tackle this and how you reduce the level of wastage within the online and programmatic system. Money is going in like there’s no tomorrow, it means an inefficient channel is receiving more and more money and it shouldn’t be, it's damaging the industry.”

Not only does it not deliver returns for advertisiers, but it doesn’t work for publishers either, he says, outlining the knock on effects of programmatic on the rest of the digital ecosystem. It fuels ad fraud and sourced traffic, pages loaded with too many ads, clickbait to attract traffic and intrusive advertising. Or using Marc Pritchard's terminology ot fuels "crap”. And that leads back to adblocking.

“We have to talk about some of these things that make advertisers uncomfortable,” he told the room. “We can't solve industry problems if we aren't honest about what those problems are.”

“[Transparency] is not just about money, contracts and audit rights. It covers many aspects and affects all advertisers. It's about adblockers – you need to understand how adblocking is affecting your communications and how you mitigate it - it's about ad fraud, which is an issue for everybody and you need to know how to manage it. Ditto for Facebook's metrics problems. And programmatic is the biggest problem of all.”

“Programmatic advertising simply isn’t working. We know that because we do a lot of ROI and analytics work and we very rarely see any programmatic work giving any positive return on investment. It can happen, and we do see it, but mostly it doesn’t and that is a real problem. There are specific reasons why it doesn’t,” he said before outlining some of those issues.

He adds that transparency is an issue because the practices it hides “distort" the media market, “ reduces advertising effectiveness” and “stifles growth and the return on investment”.

Manning showed a series of slides and charts which show the make up of the digital media supply chain, where the money goes. The one that caught most marketers' attention and garnered a lot of commentary after the event was one that showed “the true cost” of programmatic.

What it shows is that while marketers may be under the impression that 80c in every $1 invested in digital advertising reaches the consumer, the real figure is closer to 20c.

“You should aim to maximise your working investment and this is particularly true in programmatic. Too much money is going into the production chain, and not enough is appearing in front of consumers. It's a big problem and it has to be addressed. You need to be able to follow the money and know where your money is going, and if there is a conflict where the agency group has a stake in one of the players in your value chain. This is happening more and more,” he warned.

As the advertising investment moves from left to right of the slide, it gets clipped at every stage – with what reaches the consumer far less than what advertisers believe.

By the time the media dollar moves from the client, to the agency of record (AOR on the slide) through the DSP and tech providers, which each charging a fee, and the ad exchange, the assumptions is that 40% of the investment reaches the publisher.

On top of that, the impact of non-human traffic and poor viewability, a significant percentage of those views aren't even seen by people.

“If you spend $100,000 on a campaign, the publisher will receive roughly $40,000. The remaining $60,000 will disappear in terms of tech, fees, commissions, mark-ups, so publishers will only see 40% of the money. Bob Liodice (CEO of the US Association of National Advertisers) referred to this earlier [in a video link] and said 'isn't it terrible it's only 40%?' But if only that were true. Of course, that's only the start,” explained Manning.

“Before you advertise you've lost 60%. By the time you’ve advertised you can lose half of that again in poor viewability and ad fraud, so your 40% is halved. So it's not surprising that we don’t see programmatic working well … because only 20% of the money actually does anything. That's assuming also that adblocking doesn’t play a part in this.”

“I think we all know viewability is defined as half the ad being seen for 1 second in display and half the ad for 2 seconds in video. So if you believe that your advertising works well when half of it is seen for a second – then you should check that, because that is probably ambitious, shall we say.”

The numbers had advertisers shaken and concerned about how effective their spend is. And rightly so.

Estimates from eMarketer last year projected that three quarters of all digital buys would be programmatic this year. So if 75% or more of the digital budget is being spent on programmatic but only 20% of that spend is reaching the eyes of consumers, it's hard to see how advertisers can turn the dial or deliver ROI.

Manning placed a large portion of the responsibility on to clients for understanding their contracts, and the supply chain.

The other concerning aspect of programmatic is the lack of auditing capability clients are contractually given to interrogate the media supply chain and understand where their money is going.

Another chart showing the agency business model gets Manning in trouble, he says, because it “tells the truth” about how media trading works.

On the left hand side is media supply (publishers/ad networks/free inventory/cash rebates/fees/barter/native and social) in the middle are media trading arms (including agencies and trading desks) and to the right tech vendors (DSPs/data providers/cash rebates/free services).

Opt in deals, which mean advertisers agree to waive rights to audit any of this supply chain for the promise of a better deal upfront, are becoming more common. It's often described as a 'disclosed undisclosed deal” and is seen by agencies as fair game for taking on the risk of media investment up front. Agency margins on these kind of deals, according to K2, range from between 30-90%, which explains their growing popularity with media agency groups.

“You as advertisers need to know what’s happening to your money. It's your money, not anyone else's, but the trouble is that most of your contracts do not permit you a full audit of all of these things. Very few do,” he lamented.

Manning quoted a line from an Ebiquity report from 2013 which stated “Advertisers are paying top much for advertising because of a lack of transparency and agencies are potentially making profits from the lack of transparency. It was true then and it's even more so now,” he said.

The AANA also presented a series of anonymous confessions from marketers about the state of their own knowledge and understanding around programmatic and transparency.

Read: AANA: A worrying admission of incompetence from marketers