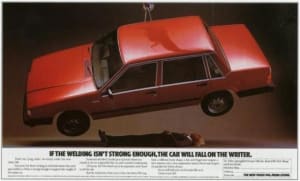 David Abbott once gave a lecture to advertising students in London. One of the greatest advertising writers of all time, he walked them though the creation and finishing of magazine and print ads that are as sublime now as they were then. And then, about half way through the presentation he stopped. He stared at a Volvo ad that was beamed three metres high behind him. "You know, I really should have". He stared at the ad for a while before continuing his presentation.

He'd written the ad about ten years before, but he was still unhappy. He was still spotting tiny ways it could have been better. He was still crafting a ten-year-old ad.

Time is the enemy of great work. Getty Images and a base knowledge of InDesign have given us the capacity to create what is, to all intents and purposes, a finished ad in moments.

And every magazine in the country is filled with the bastard children of those two tools. We have lost either the will or the capacity to craft.

Our work would improve immeasurably if we followed the process that led to some of the greatest print and magazine ads of all time.

Don't be frightened to use a pencil and a pad.

Turn off the Mac. Present scamp layouts and let the client react viscerally to an idea as opposed to hasty art direction.

Image libraries are not your friend. The client will fall in love with the shot you've found and you remove your capacity to shoot with the photographer who will find the nuance needed to make your ad great.

Rewrite the headline until you've absolutely exhausted the permutations. That great line will make itself apparent, but only after hours of variants.

And if all else fails and you simply can't think of a solution, put yourself in the ad.

It worked for David Abbott.