OPINION: Stop worrying about the Socceroos brand and focus on winning 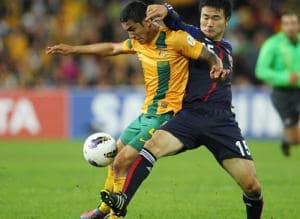 I may be a little bit “old school” or maybe I’m just too emotionally invested in the subject matter, but hearing football clubs or national teams referred to as “brands” makes me cringe a little.

Brands are words that grown-up people apply to things they’d like to understand, control and ultimately then have influence over.

But guess what? It’s football. You’re not in control of it. You never will be. Its 11 players on a football pitch kicking a ball around. It doesn’t play by the same rules that a box of breakfast cereal does. That’s why so many people love the game so much.

People don’t suddenly wake up at 35 and decide to follow a football team with that decision then shaped by the infinite number of brand messages they get from competing clubs all vying for their attention. I’d imagine the Google search results for “which football club should I support” wouldn’t register very high on their most-searched terms.

Football club and player allegiances are most generally formed at an age before the individual could even spell let alone understand brands. Factors influencing this decision include geography (supporting your local team), existing family allegiances (the choice to go with or against your brother/sister/father/mother) or a star player who creates an instant emotional connection.

Football is about winning and star players – successful teams and heroes for kids to follow when they are pledging their lifelong allegiances.

Players only get in a position to be called “brands” after they’ve already made the emotional connection with the fans – that’s why in a lot of cases a sportsperson’s off-field misdemeanours are often forgiven as long as they keep performing on the field.

You can’t manufacture a long term sporting brand - team or player - unless it delivers on the park where it ultimately counts. You can create initial noise and interest but unless it delivers where it matters, people - especially young kids - won’t be fooled for long.

In the A-League, many of Sydney FC and Melbourne Victory’s “brand” issues would be immediately solved by winning more games of football.

The Socceroos “brand” has been highlighted recently as being on the wane due to a reduction in ticket sales for Socceroos games, since their peak in the qualification period for the 2010 World Cup, and in the immediate afterglow of their first appearance at a World Cup in 2006 and their subsequent over-achievement in reaching the last 16 of the tournament.

That’s right ... the Socceroos brand was at its peak immediately after its most successful period on the pitch in its history. Who would have thought?!

The Socceroos had 13 players in the 2006 World Cup squad playing for teams in the three biggest leagues in the world – the English Premier League, La Liga in Spain and Series A in Italy.

Last month for the two World Cup qualifiers the amount of players in the squad playing in those three leagues totalled just two.

The 2010 World Cup was less successful than in 2006 with the Socceroos being eliminated at the group stages.

So in a country where football is not the number one sport, a less successful team with fewer star players playing at the highest level translates to lower crowds for the national team. Is that really a surprise?

This is an issue for sponsors, ticket sales and a significant issue for us producing a magazine for Australian football fans.

Who will be the next group of Australian players to break through at the highest level? Who will make the names and numbers kids will demand to display on the back of their Socceroos/club shirts and whose faces you will see smiling back at you from the cover of FourFourTwo?

Don’t believe me? Next time you see a 12 year old kid walking down the street in a Manchester City shirt with Kun Aguero on the back – feel free to stop and ask them what it was that first attracted them to the “brand”?

At the time of writing this, Tim Cahill has 399,044 followers on Twitter compared with 20,367 followers for The Qantas Socceroos.

How much of the sponsorship revenue the “brand” generates is being re-directed into producing the next generation of players capable of competing at the highest level? There’s a question to consider.

Worry about where the next ten Tim Cahills are coming from first and the Socceroos brand will take care of itself.