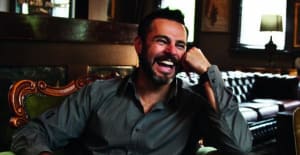 Next time you’re patting yourself on the back for that particularly witty (or brutal) criticism you said or wrote about someone else’s work, do me a favour and ask yourself when was the last time you built something up?

Each time a new campaign launches in this region there’s a predictable wave of negativity. We’ve come to expect it. It’s a phenomenon I’ve thought about a lot since hearing a speech delivered by the ever-inspirational James Hurman at Circus this year. James was the planning director of Colenso BBDO in New Zealand before moving to China as planning partner at Ogilvy Shanghai.

In his talk he was trying to unlock the secret of Colenso’s historical success, and highlighted a particular trait of former managing director, Brent Smart – one of its most successful recent leaders. What was Smarty’s unique characteristic?

He talked people up behind their backs.

He was a builder, not a bomber – whether to your face or in your absence. And I know this from personal experience.

As James talked about Smarty’s influence, I felt the room go a little silent – uncomfortably so. In my opinion a lot of people in the room, myself included, were having a good look at themselves, and I’m not sure everyone was thrilled with what they saw.

It’s an interesting thing about this industry, isn’t it? We spend so much energy trying to convince our clients to be positive in the face of difficult times, yet gleefully descend in epic proportions upon each other’s work like a bunch of nay-saying seagulls on a chip.

Now I’ve always been a defender of the anonymous blog post. The minute we shy away from the harshest criticism of our work is the moment we lose one of the greatest motivations to sharpen it.

But has it become the pervading voice? The loudmouth in the room who drowns everyone else out? I think it has, and that’s frustratingly lazy.

Bombing is easy, any four-year-old will tell you that. And it’s fun. Grab a hammer and go postal. I have a bit of a temper, and there’s nothing I like more than breaking shit to let off a bit of steam. But it requires little to no skill or creativity, and adds very little to the world.

Building is different. It requires talent, perseverance and, most importantly, courage. When you build something it’s there for all to see – for all the bombers to take aim at. And when you build by pointing out the strengths of something someone else created, you become part of that target by association.

It’s uncomfortable, but who would you rather be?

Now I’m not suggesting we become an industry dedicated to Pollyannaism, far from it, but there needs to be a balance. At the very least we need to be aware and wary of this pervading negativity we seem to be nurturing.

We’re an industry that’s meant to be built on inspiration, let’s start being a bit more inspiring, eh?