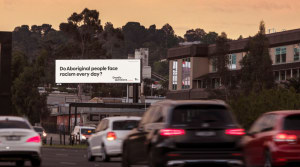 After being deemed too controversial to run by outdoor media company APN Media, Aboriginal Victoria's Deadly Questions campaign in support of Australia's first Treaty legislation has been picked up by Ooh!Media.

APN's decision was based on advice from the Outdoor Media Association (OMA), which suggested the creative by Clemenger BBDO Melbourne could be viewed as discriminatory according to the AANA's code of ethics.

The outdoor aspect of the campaign will see billboards featuring confronting questions on Australia's Indigenous population, such as “Is being Aboriginal just the colour of your skin?” and “Why can't Aboriginal people just get over the past?”

The text was sourced from the Deadly Questions website, promoted as a safe space where anybody could ask any question – no matter how uncomfortable – about the culture, history and experience of Aboriginal people anonymously. This was set up as a way to educate about Indigenous culture, as well as the purpose, value and process of Treaty – which was passed in Victorian parliament on 22 June.

“We understand that some of the questions asked by the public – and that we are repeating in the campaign – are provocative, but that's the point. To have an open discussion we need to acknowledge that some ugly viewpoints exist.

“We need our media partners to stand up and support Aboriginal Victorians throughout this process. It's incredibly disappointing to have APN and the OMA dictate what they think is appropriate with regards to discrimination, when these questions are the ones that we invited, are providing response to, and represent the real conversation that Victorians want to have.”

Now that Ooh! have agreed to run the outdoor creative, Aboriginal Victoria and Clemenger BBDO Melbourne are relieved.

“Our brief was to change perceptions and create work with cultural impact,” said managing director of the agency Simon Lamplough.

“We're grateful that Ooh!Media has come to the rescue and agreed to help facilitate this important conversation.”