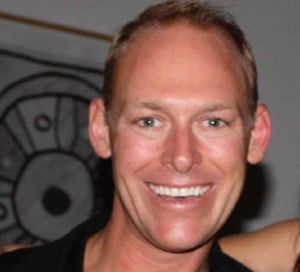 Australian digital media industry figure Sam Smith has died following a battle with a brain tumour. He was aged 48. He leaves his husband, Mark Timmins.

Friends and colleagues described him as someone who would light up a room with his contagious enthusiasm and energy, who was a relentless networker, a creative deal maker and always had time to help colleagues.

Most recently he worked for Adobe in advertising cloud enterprise sales but many remember him for his early career pioneering digital ad sales, including ninemsn, Yahoo7, News Corp and Adconion.

Tiffany Damm, who first worked with Sam waitering when they were university students in Melbourne, says he could charm even the most difficult of guests, a trait that would come in handy for his future media career.

“I was working at Nine when Sam joined ninemsn” she says.

“With TV in its heyday the sales team weren’t too keen to help the ‘poor cousin’.

“Didn’t bother Sam. He just kept showing up. Friday night drinks in the Channel Nine bar. Cigars & Karaoke at Fidel’s at Crown. If the team were there, Sam would be there.

“Eventually he had the entire Channel Nine team selling the ninemsn story, myself included.”

Steve Vamos, who was the CEO of ninemsn at the time, says Sam was a fearless and effective pioneer of digital ad sales.

“He helped build our business and our industry,” says Vamos.

“As a person, Sam is an unforgettable human being. Connecting, caring and engaging with people in a very special way. Sam was a lovable guy.

”The world is a better place for Sam Smith’s impact on it. We will miss you, mate, and never forget you.”

Colleague Miffy Coady says Sam networked like no other, contributing to his rise in media and career success.

“I remember Sam calling me to tell me he had just met Kerry Packer in the ninemsn HQ courtyard, Paddington,” she says.

“Only Sam dared to approach Kerry during his break from a board meeting. Sam stretched out his hand to introduce himself and lit his cigarette.”

In 2013, Sam and Miffy worked together again at News Corp.

“Sam's enthusiasm was contagious, he coached and mentored rising stars and poured all his energy into his work, Sam was an invaluable addition to any business,” she says.

“Always more than a colleague, Sam had a gift of making you feel extremely special. From the cleaner to the chairman, Sam knew you by name and welcomed you with a beautiful smile. Sam made it his mission to make sure his colleagues and clients (who were all friends ) had the most wonderful experience.

“When employing Sam, you also employed Jono Smith, his brother. Both cut from the same cloth, fine men and together a strong, unique team. Spanning their careers they worked together at ninemsn, Yahoo and Adconion.”

Carolyn Bollaci says Sam was her first friend in Australia. He interviewed and hired her from Microsoft San Francisco.

“Over the years we spent working together were some of the most entertaining as we introduced banners and homepage takeovers to the Australian market,” she says.

“Sam took me wedding dress shopping and flew to NY to ensure he was by my side at my wedding and I was so proud to be present at his. Everyone that met him, loved him.

“He was the life of every party (which was also a prerequisite of any member of his team). He lit up any room he entered. He was all smiles, always happy. Heaven is one star brighter.”

Whenever Gai Le Roy thinks of Sam she sees him smiling, laughing and most of all dancing.

“In the early days of ninemsn none of us really knew what we were doing with all this digital stuff and most of the Channel 9 folks thought that it was a fad,

“Sam was able to bring everyone along on what he made feel like an adventure with his enthusiasm combined with the perfect amount of cheekiness,” she says.

“Sam not only made his mark on the local market but through his incredible energy he made the Australian ninemsn team infamous globally within Microsoft as the crew they wanted to hang out with at any industry party.

“It really wasn’t really an industry party without the joyous Sam Smith dancing up a storm on a bar.”

Prue Cox first met Sam when she was working at Yahoo! in 2000.

“He lit up the room, was so full of energy and passion for life that I immediately knew we would be friends,” she says.

Over the next 20 years they would work together at ninemsn, Yahoo!7 and News Corp.

“We shared two hilarious trips to New York, on our way to Microsoft conferences and many a stage together at Karaoke,” she says.

“Sam lived life to the fullest, always giving 120% to everything he did and more importantly to everyone he met.

“His laugh was infectious and his smile would always beam the brightest in a room. I am very grateful to have experienced Sam Smith magic in my life for the last 20 years.”

Alex Littlejohn, who worked with Sam at Adconion, says he was a pioneer in a roller coaster industry, one of the great strategic thinkers and creative deal makers.

He described Sam as one of the most stylish men in media and advertising.

But he carried this with more than just good looks and charm.

“From sashaying between meetings, breaking the ice in a tense negotiation with his easy smile, Sam’s uncanny ability to immediately make everyone around him feel at ease no matter what the environment, had a profound impact not only in Australia but around the world,” says Littlejohn.

“His legacy transcends the board room, all the way to ensuring the cleaning staff in the office were treated as ‘team members’ and ‘on the same journey’ as his colleagues, to making tough professional decisions when they were needed but doing so always with empathy at their core.

“He could connect people from seemingly disparate points of view, and bring them together no matter what the circumstance -- clients, competitors, colleagues -- it didn’t matter to Sam.

“This approach not only played a part in building great commercial success, to the corporations Sam worked for but it also built many lifelong friendships.

Jo Gaines and Sam were co competitors for most of their careers.

She says he always treated everyone and everything exactly the same, with grace and honesty and empathy.

“Customers and employees alike loved being around him and it was one of the keys to his business success,” she says.

“What Sam taught me was the importance of staying true to your values and being grateful for every single day.

“He was sent here to teach us all how to be much better humans and take care of each other, without ever compromising on what is right and what is fair.”

Stephen Hunt was at Adconion launching AdconionTV when Sam headed RedLever, a branded content division years ahead of its time.

“We became the dynamic duo pitching endlessly together,” he says.

“He taught me so much back then about how to lead a team, the theatre that goes into any pitch worthy of an audience and the importance of culture above all else.

“I departed Adconion to set up TubeMogul and after being lured to the US a few years in, I needed to find someone to take the reins locally of a team who I cared for so deeply.

“Sam was the only choice and, after some persuading, he made the jump. Together again but on different sides of the world we did great things and grew closer as mates.

“Whenever I ran into Sam I was always met with the widest of smiles that preceded and the deepest of hugs.

“You felt instantly happier in his presence and if you were lucky enough to be around him often, he would challenge you with his constructive feedback and grow you with his endless encouragement.

“He was generous with his wisdom exuding a contagious sense of purpose that allowed him to bring everyone along for the ride. A friend and mentor I’ll miss dearly who clearly touched the lives of so many people around the world.”

Adobe
Phil Cowlishaw and Jeremy Pell, colleagues at Adobe, say Sam had a wonderful way of making everyone feel welcome.

In 2016, the TubeMogul team went through a rollercoaster when the business was bought by Adobe business.

“As always, Sam took this in your stride,” the colleagues say. “While the rest of us were trying to figure things out, asking ‘who’s that?’ and ‘how?’, Sam had already been out to lunch with them, become their best friend and got it done.

“Sam taught us all about leadership, embracing diversity, driving culture, and how to do it all with a smile.”

“He made us feel like family when many of us were so far away from home.” – Carla Cook

“Sam your energy was infectious. Your belief in our team, shone through always. Your focus and trust in the TubeMogul team is what propelled us all to great heights professionally and in business” – Cameron McEvoy

“His welcoming of me to the team I will never forget, and I am so grateful for. He will always be remembered so fondly” – Ellen Kearns

“Sam had a way of making people feel like they had known you their whole life.” – Camille Savage

“I'll always remember how you made such an effort to make me feel like part of the team. It's something that I will never forget, and will strive to emulate in your honor going forward.” - Joe Peters

“I learnt so much from you both professionally and personally, and only hope that a little bit of your sparkle lives on in all of us.” - Danni Brown