Obama has been offered a job at Spotify 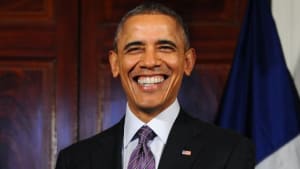 In 10 days, President Barack Obama will be out of a job. Thankfully, Spotify has him covered.

In what could be one of the best brand stunts of 2017, the music streaming company posted a new job advertisement on its career page on Tuesday for a job titled the “President of Playlists.”

While it doesn’t reference Obama by name, it’s pretty clear he’s the only one cut out for the job.

The job ad says applicants should have “at least eight years’ experience running a highly-regarded nation”.

It also calls for "a friendly and warm attitude, and a Nobel Peace Prize".

Spotify CEO Daniel Ek gave the commander-in-chief a heads-up on Twitter, writing: "I heard you were interested in a role at Spotify. Have you seen this one?" before linking to the clever ad.

Hey @BarackObama, I heard you were interested in a role at Spotify. Have you seen this one? https://t.co/iragpCowpO

The ad comes in response to Obama recently joking he was hoping for a job at Spotify when he leaves the White House.

It also takes a swipe at President-elect Donald Trump, saying the President of Playlists must "attend daily briefings", and "analyse data and performance of playlists ... using all available intelligence".

While there’s no official word on whether the 44th president would actually take the aforementioned position with Spotify, it wouldn’t be his first time curating playlists for the streaming site.

Obama has been sharing playlists of his favourite music via Spotify since 2015, including tracks by Nina Simone and Bob Marley. For Christmas 2015, Mariah Carey's seasonal super-hit All I Want for Christmas Is You was also an Obama favourite.

The stunt is gaining Spotify some serious media attention, as well as some brand love on Twitter.

Should be careful with that job description. I know someone with a track record of successfully applying for a job he's not qualified for... https://t.co/RFX0wL0YCr

LOL - I know a dude looking for a job now who could be a good fit. https://t.co/b1DWK35Kcm

During an interview about his plans for the future, Obama said he’d like to work for Spotify. #Spotify’s answer https://t.co/daTYjh35Ls pic.twitter.com/qpti60xQsf