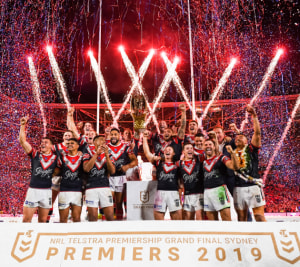 The NRL grand final between the Sydney Roosters and Canberra Raiders drew 1.86 million metro viewers on Sunday night for Nine, with the clash seeing a drop off of close to 300,000 viewers.

The match between the two sides to decide the 2019 premiers were unable to match up to last year's game, which had an audience of 2.12m.

Sydney toppled Canberra in a controversial 14-8 victory, which saw the Roosters become the first team in the modern era, to go back-to-back in premiership wins.

Other segments on the day including the pre-game entertainment and post-game presentations drew 939,000 and 1.08m metro viewers, respectively.

Nine’s primary channel won the night across the five-city metro with shares of:

The NRL Women's Grand Final drew an audience of 284,000 metro viewers while reaching a total of 468,000 national viewers.

In the overnight main channel battle, Nine held a dominant 38.8% share, while Seven followed in second place with 15.2% and Ten left with only 5.7%.