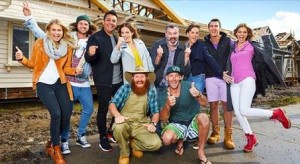 The Block helped Nine grow its commercial share of advertising revenue in the second half of 2017.

The Australian TV market has reported minor declines in advertising revenue in the second half of 2017 as Nine's strong second half helped it deliver the largest revenue share for the calendar year.

The latest figures, audited by KPMG and released by ThinkTV, show the total TV ad market, including metropolitan free-to-air, regional free-to-air and the relatively small amount of advertising on Foxtel, had a year-on-year decline of 0.7% to $2.17 billion in the second half of 2017.

This is a significant improvement on the 3.1% decline for the same period a year earlier.

Although the total TV market was down 0.7%, metropolitan free-to-air TV ad revenue grew 1.4% to $1.5 billion - the first time the metropolitan ad market has had growth in three-and-a-half years.

"The Metro FTA TV market appears to have staged a level of recovery in 1H18," Raykovski wrote in a note to investors.

"This is generally consistent with our discussions with media buyers, who have suggested to us that the TV market has benefitted in 1H18 from (1) some of the issues with digital advertising (lack of measurability and potential for brand damage), (2) lobbying efforts from Think TV, who have emphasised to advertisers the value delivered by TV, and (3) the success of new formats like Australian Ninja Warrior providing increased confidence in the medium."

Of the three commercial FTA TV networks, Nine had the strongest year with huge gains in ad revenue share.
Nine's tent pole shows Married At First Sight, The Voice, Australian Ninja Warrior and The Block helped it end 2017 with the largest ad revenue share for the first time since 2005.

The key for Nine was Australian Ninja Warrior, a new format that had a national series average audience of 2.5 million and built momentum for The Block.

In a comparison of the top 20 programs, Ninja Warrior featured six times and the Block twice with most other spots taken up by large sporting events.

Although Seven still won the ratings season by winning the most number of weeks with total people, Nine's consistency in schedule helped it win key demos, which has rapidly turned around its ability to commercialise content.

The huge improvements on a disappointing 2016 was not lost on Nine boss Hugh Marks.

“To achieve this result in such a short time frame is very humbling and validates our strategic focus on delivering the demographics that matter most to advertisers,” Marks said in a media statement.

The overall results indicate that advertisers are still willing to invest in television in a highly fragmented and competitive media landscape.