Nine's newspapers refuse to publish an advertisement from Crown 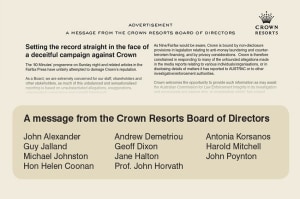 The Sydney Morning Herald (SMH) and The Age have declined to publish an ad by Crown Resorts which labels reports by the newspapers as a “deceitful campaign” against the casino.

On Sunday night, Nine’s SMH, The Age and 60 Minutes revealed an investigation into the casino’s alleged links to organised crime and money laundering.

The reports hit the gaming group's share price, sending it tumbling by 7.7%. Billionaire James Packer is the largest shareholder in Crown.

In response, the Crown launched an advertising blitz today, including a full page in News Corp’s national broadsheet, The Australian.

The full-page ad is signed by the Crown Resorts’ board of directors, including chair John Alexander and Harold Mitchell.

It labels Nine’s reports as a “deceitful campaign against Crown” and refutes claims of ties to money-laundering.

However, both the SMH and The Age declined to run the ads and instead published a statement refuting The Crown’s claims against its reporting.

“We declined to publish Crown Resort’s “setting the record straight” advertisement that is running in many Australian newspapers today in response to The Sydney Morning Herald, The Age and 60 Minutes’ joint-investigation,” a Nine spokesperson says.

“We reject Crown’s claims that the story was unbalanced and sensationalised.

“Nobody was paid to participate in the investigation. We stand by the accuracy of our multiple stories, the investigation and the hard work of our journalists. Crown was given the opportunity to provide comments in the stories but chose to give a single statement that we did publish.”