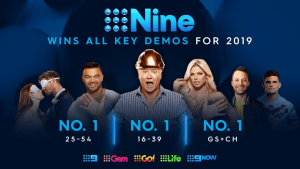 Nine has reclaimed the crown as the number one network in Australia, ending Seven's 12 years in the top spot.

Led by its strength in primetime, combined with its major sporting events, Nine won the year across total people, with a network share of 29.4%, up 2.3% from the previous year.

Despite the win on total people, Nine's conversation in market was still around what it labeled as it's is "reliable slate of family-friendly programming" which saw the network also take out all key demographics including 25-54, 16-39 and Grocery Shoppers with Children.

Nine’s primary channel also ranked as Australia’s most watched channel in 2019 with all key demographics.

“Four years ago we made the strategic decision to focus on the thing that matters most to advertisers – the key demographics. We are pleased to have won another year in the key demographics, driven by the most consistent slate of premium content that engages millions of Australians every week, across every platform," Nine chief sales officer Michael Stephenson says.

Nine's strength in 2019 has been built around its primetime offering, with finales for shows including Married at First Sight (2.78m), The Block (2.65m) and Lego Masters (2.47m) all taking spots in the top four entertainment programs for total people this year.

The network also had similar success in sport, with all three State of Origin games also taking a spot in the top four sporting programs for the year (Game 1 - 3.23m, Game 3 - 2.91m and Game 2 - 2.84m), with Seven's broadcast of the AFL Grand Final taking second position (2.96m).

Stephenson told Adnews the network is confident in what lies ahead in 2020, but remains focused on emphasising Nine's interests in delivering over total people.

"We have a full schedule of proven performers from the beginning of the year until the end of the year meaning we will deliver consistent audiences across all screens across the whole year. We will be focussed again on leading the way against every key buying demo," he says.

"Our TV teams will go to market with a TV + BVOD proposition powered by VOZ data and using 9Galalxy technology whilst our digital teams will provide addressable solutions using our 9 million signed in users.

"The combination of Nine and 9Now is proven to deliver better advertising returns than social video and we will be focused on helping brands to return to growth as they re-allocate their budgets back to proven media."

The loss of the crown will come as a blow to Seven, which struggled in primetime throughout the year, with shows such as Dance Boss and The Super Switch underperforming.

The network also pulled the plug on its second season of MasterChef in 2019 and paused production on the reboot of Temptation Island.

At the network's upfronts this year, new Seven CEO James Warburton assured buyers that his company would invest 30% more back into producing new primetime shows and formats, target the 25-54 demo and "dominate" sport Friday and Saturday nights.

The move was a shift away from the previous year, when chief revenue officer Kurt Burnette stood on stage, making the bold claim that the network would win total people right through to 2020.

It wasn't all doom and gloom for Seven however, the network still outplayed rival Nine in both the breakfast TV and nightly news slots, with Sunrise taking the sword to a Karl Stefanovic-less Today.

Despite a sluggish first six months for Ten, the network was able to claw back viewers in the second half of the year, eventually growing its share by 0.5% between August and November.

This success was led by breakout format and reality singing show, The Masked Singer, as well as Survivor, The Amazing Race, and the two lead Bachie franchises.