NLM's biggest winner, Inside Out

NewsLifeMedia is the biggest loser of the three main magazine publishers in the latest round of magazine circulation figures.

While Bauer and Pacific Magazines have seen year-on-year overall declines of 8.09%, NewsLifeMedia has suffered a 12.33% loss.

Across its nine titles (not including Taste magazine, which only launched in the past 12 months), NewsLifeMedia's paid print circulation dropped by an average of 12.33% year-on-year in the six months to June, according to the latest statistics from the Audited Media Association of Australia.

While Bauer's overall print circulation across its 39 titles fell by 8.09% YOY, this doesn't include Elle Australia or Yours magazine, which launched within the last year, or Shop Til You Drop, which upped its frequency from monthly to fortnightly in October voiding year-on-year comparisons.

It's no surprise that the teen girl magazines are struggling the most. The Children's and Women's Youth categories show the biggest drops in magazine circulation, at 25.97% and 33.36% respectively.

Conversely, the Health and Family and the Home and Garden categories held strong.

Home and Garden was the strongest category, dropping just 2.17% YOY. Its strongest performer was Pacific Magazines' Australian Home Beautiful, which grew its circulation by 8.37% YOY to 91,157. Readers Digest's Australian Handyman took the biggest hit, down 9.4%. The rest of the category was flat or marginally up or down.

Health and Family dropped overall by 5.32% YOY. Bauer's Women's Fitness was the big winner here, adding 10.91% to its circulation, to 61,152. In a sign of the times, Pac Mags' Diabetic Living also grew circulation, up 7%, while the other growth magazine was Healthy Life Media's Healthy Food Guide, up 2.2%.

In the Women's Lifestyle category Frankie added another 4.4% to its circulation, consolidating its position as the third biggest women's mag. Harpers Bazaar held steady, as did Instyle and Russh.

Boats and travel: steaming ahead

Digital subs not there yet

When digital sales are added to print sales, Just Magazines' Just Cars was the only title to see YOY gains in this round of ABCs. It grew 0.3% YOY, with total sales in the six months to June of 51,518, up from 51,358 last year.

The majority of titles that now have a digital version do not yet have YOY results, as their digital product has launched within the last 12 months. This includes Delicious, Taste, Women's Health, Money Magazine, Vogue Living, Better Homes & Gardens and New Idea.

Click the images to see the numbers for yourself.

Clarification: This story originally suggested that NewsLifeMedia's overall circulation declined the least. Bauer pointed out that our numbers were wrong. We have recalculated the total circulation of each publisher minus titles that cannot be compared like for like and come up with the following declines: Bauer and Pacific Magazines both -8.09%. NewsLifeMedia -12.33%. 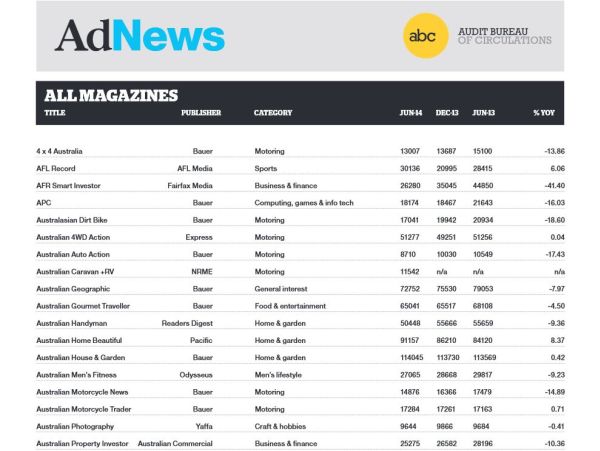