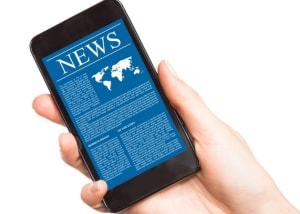 Newscorp global CEO Robert Thomson gave a wide ranging interview during a webinar with the American Australian Association in the US:

Jennifer Nason: So, Robert, I just want to shift back to...the broader subject of journalism, and you're a journalist at heart and by profession, that is what you've spent your whole life doing. News Corp, you and Rupert in particular, have been very vocal advocates for journalism in the context of the big social media platforms and their continued publishing and not paying for content. Can you talk a little bit about this issue - why is it so important to you and to Rupert, and ultimately is it a fight that you can win?

Robert Thomson: Well it's an existential issue for journalism. Journalism around the world is unsustainable. And you would have thought that in a digital age, if you're a digital startup without the cost of paper, without the cost of printing presses, that it should be easier to prosper, but whether it’s Vice, whether it’s Vox, whether it's BuzzFeed, none of these so-called digital natives have been successful either. And so, there's something wrong with the ecosystem.

But actually, we are, to your question, at a fascinating moment, with negotiations underway in various countries and, dare I say regulators primed to pursue cases. And a general understanding amongst savvy media companies that some of our credulous colleagues have in the past been digital dilettantes. And this confluence of consciousness, actually, as you say, one would not have happened without Rupert, or Lachlan, frankly, and the astute activism of a feisty few at News Corp over more than a decade - because we've been contending with literally battalions of lawyers and legions of lobbyists dragooned by big digital. And there are as well the mindless myrmidons in the pay of Silicon Valley who are themselves exasperated that justice is a little closer to being done, i.e. content being paid for. And that the solipsistic sophistry of the past has been revealed as more vacuous than virtuous.

And in particular, we've reached agreement with Facebook in the US, and Mark Zuckerberg and I shared a stage here in New York a few months ago and bluntly my first question to Mark was, “what took you so long?” Because he had recognized, he had arrived at the place where he realized that he needed to pay for content and to ensure that there's a healthy ecosystem. The premium content demands a premium. And I do have faith in Sundar Pichai personally at Alphabet or Google, whatever you want to call it. But look, that's a complicated company, and he's in a conceptual contest with flat-earthers and Philistines.

But to be frank and fair, regulators around the world have figured Google out and a quick Google search by Google executives should reveal that immutable truth to them. And those in that company who imperiously believe in the press as panhandlers, in a sort of mendicant media, where they hand a little money here, a little money there, that's tokenistic and unsustainable. And at the moment in the US, there are 50 state attorneys general who are looking to interview them, across both parties. So, it's a bipartisan concern. So, in that sense, the Google gig is up.

Jennifer: So, the ACCC in Australia recently announced restrictions on social platforms who use original journalism. So, this is a potentially quite revolutionary initiative by the Australian Government. And I think one of, if not the first of its kind, one of the first of its kind. Do you think it will stick? Is it going to work down there? What are the implications of this type of policy response do you think?

Robert: Profoundly important. The ACCC work on this subject is peerless. And it's something that every Australian should be proud of. And actually, everybody on this call should, whatever your interest, read their digital report because it's not just about journalism, it's about the digital landscape generally, and it's the most enlightened, well put together, well researched tech travelogue of its kind. And it's both illuminating and it’s shone some light on the digital dark corners, and I know it's been read actually, by regulators around the world, and I keep encountering ACCC phrases and formulations in London and in Brussels.

The Vice President of the European Commission, Margrethe Vestager, who, for many years, was a solitary voice of sanity, has seen the report. And so, it's certainly added to the collective wisdom. And she of herself has done brilliant work, she’s a brilliant individual and has exquisite taste in films. In a speech she once quoted from the original Blade Runner referring to the potential loss of social value as being like “tears in rain,” but there are more regulators around the world, ensuring that tears will be shed no more.

And the importance of the ACCC proposal is there absolutely has to be a mandatory code for content, for algorithms, and for personal data, because at the moment there’s a complete lack of algorithmic transparency. A tweet here and there and information or views or values do disappear in the rain and the data relationship between big digital and consumers is so obviously an unequal treaty.

And for example, that's particularly the case for Amazon where the data relationship between Amazon and its corporate clients is an unequal treaty. One area there that regulators, not just in Australia, are focused on, is that you can't dominate a horizontal marketplace like Amazon and have your products in sector verticals, as Amazon does with books and for example, it has, depending on the market, around 95% of the audiobook market, which is just unsustainable when it also has audiobooks. And not just in Australia, but globally, the digital denouement is looming.

Jennifer: Yeah, we will, I think for everyone on this call and certainly when we post the replay of this, we will make sure the link is on the AAA website for all of you, or any of you interested in reading the work by the ACCC. I agree, it's very well done, and it's a very interesting read no matter how educated you are around sort of journalism and what is going on right now. Do you think, Robert, having worked all over the world, do you think journalism is somehow fundamentally different between Australia, the US, the UK or is it all basically the same, are the issues basically the same?

Robert: In terms of revenue sustainability, the issues are similar, if not exactly the same. But when you look at, there are various estimates of how many journalists in the US have lost jobs and how many journalist jobs just have disappeared in the last 10 years and it's, it seems to be around a third, and more obviously in some of the larger media companies, every day of late there have been announcements of redundancies and as you know, in Australia, we've unfortunately, ended print publication for many of our local and regional papers and they've become all digital, which will affect some of our traditional partners in print. But that's not a decision taken lightly. That's a decision taken because we want to ensure that we can do as much journalism as possible on as many platforms as possible.

But it's indicative of the challenge that not only we face but publishers large and small, print and digital, are confronting around the world. It is a dysfunctional digital landscape that the rewards have disproportionately gone to distributors not to creators, and it's rectifying that imbalance that's so important which is, you know, again back to the ACCC work and the DOJ in Washington, the CMA in London. All the regulators have, they actually have been on a journey, and it's become more and more obvious to them, the longer they've looked, the longer they've had experience with this debate, that whether it be journalism or some other professions, that unless you resolve these contradictions, the commercial damage is obvious, and the social harm will be profound.