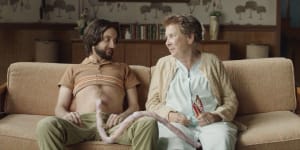 Skittles is known for its outlandish advertising but it's Mother’s Day ad for 2017, by DDB Chicago, apparently went a little too far, with its dramatization of a mother and son who are disturbingly close provoking some complaints, and leading Skittles to pull it from YouTube. The brand told AdWeek it made the ad for mums who like gross jokes, but it's taking it down for those who don't find it funny.

Netflix is closing in on Stan, announcing its first original Australian series. The supernatural crime drama, titled Tidelands, will be filmed in Queensland next year. The series, created by the team behind the Network Ten drama Secrets & Lies, will follow an ex-criminal who returns to her mysterious hometown. Netflix's first Australian original series comes just over two years since it launched in the country. The move could have an impact on Stan, which has previously boasted its Australian content.

Australia’s largest online pet supplies company Pet Circle has appointed The Core Agency as its creative agency, following a competitive pitch. The independent agency will manage the brand’s communications, including brand development, design, digital and integrated advertising, with the first work to be released in coming months.

Cannes Lions has today announced the names of the 15 women who will participate in this year’s See It Be It program. The initiative was launched in 2014 when Festival organisers identified a dramatic gender imbalance in its audience of middle and senior level creatives, reflecting the low numbers of women in upper levels of the industry globally. A slew of top creatives have been named from across the world, including Australia’s very own Shannon Crowe, who is a copywriter at Clemenger BBDO Melbourne.