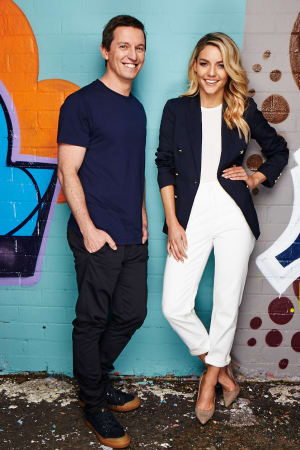 Another show down, but Rove not out

After axing its Sydney 2dayFM breakfast show hosts Rove & Sam in January from the prime time breakfast slot and moving them to a 7pm show, Southern Cross Austereo (SCA) has now also pulled the duo from this slot. It turns out the last show was on Friday, SCA confirmed.

A spokesperson from SCA said: “Rove's remaining within the SCA family and working on a new project with another part of our business. Sam's contract has now ended and we wish her well with her coming up TV work.” SCA made the breakfast show changes after a slew of poor ratings. The Em Rusciano Radio Show with Harley Breen now fills the breakfast spot.

The IAB Australia Audio Council has elected head of digital strategy for Southern Cross Austereo, Chris Derrick, to the position of co-chair, taking over from Pandora's business development and partnerships head Rick Gleave, who was council co-chair for the past two years. Pandora officially closed its Australian last week. Derrick has 18 years of experience spearheading digital strategy. The council is working on a number of education pieces including guidance on best use of creative across different audio offerings. It will soon be releasing a glossary of commonly used terms and metrics, in line with a number of IAB Australia Councils that are also releasing glossaries to help set standards in terminology and establish a base understanding to move the industry forward.

ASOS praised for not photoshopping models

ASOS has taken a step towards representing more women by refusing to airbrush their models; instead proudly putting their stretch marks on display. A number of different models in swimsuits are showing off their stretch marks for pictures on the site, while others have scars or birthmarks on display. Shoppers have been praising the online brand for helping to make “normal” seem more natural.

Caleb Bush will lead experience marketing agency GPJ as Peter Rix steps down as executive chairman after 14 years. He will continue as non-executive chairman through until December 2017. In his 45-year career, Rix has worked on large projects within the events and music industry, including the Sydney Olympics Games, the NRL grand final and ARIA Music Awards. Bush will continue the next stage in the agency’s transformation from an events business to a full service experiential agency.