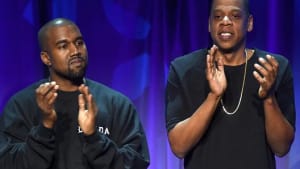 Did Kanye West confirm Apple and Tidal are in acquisition talks?

After the announcement last week that Vodafone appointed GroupM to build its Team Red unit in Australia and bring the structure into alignment with the rest of the world, it has today announced that MEC will lead the business. The account had sat with Bohemia.

Foxtel has launched a new channel called Binge to address a consumer demand in on-demand content. The channel will allow subscribers without an internet connection the ability to watch whole seasons of shows from HBO, 21st Century Fox and other studios. Binge will replace the SoHo channel, with the majority of its content moving to the Showcase channel.

Last month, it was rumoured Apple was looking to acquire Tidal, Jay Z's streaming service. While there hasn't been an official confirmation about the takeover, Kanye West says Apple needs to stop playing hardball and give Jay Z his check. In a series of colourful tweets, West addressed the Apple/Tidal beef, saying it's time the tech giant stopped their "dick swinging content" and make a deal with the upstart music platform. His rant suggests that acquisition talks between Apple and Tidal aren't going well, if they were ever real.

In what Bauer is calling an Australian publishing first, Elle has created a series of interactive shoppable videos where consumers can click and buy direct from the screen through a retailer’s online store. The video offering follows Elle’s partnership with UK-based video production company. It will offer commercial partners across Elle’s luxury brands opportunity to tap native video content.

Celebrity jungle is back for 2017

Chris Brown and Julia morris are back to host the next series of I'm a Celebrity Get Me Out of Here for Channel Ten in 2017. The ratings hit show will be live from South Africa, five nights a week for a third season. Julia Morris said: “My Darling Doctor and I are hanging to return to our luxurious jungle paradise to watch the poor celebrities battle it out with various predators… there may be some animals there too.”

Myer has launched an initiative to lend support to women and families who are the victims of domestic abuse. The Give Registry, a  play on department stores' staple gift registry, allows customers to donate an 'essential item' from a list of things that are much needed that will then be distributed via the The Salvation Army’s network of crisis accommodation and refuges. Myer will match every item donated by customers.

BMF has been named the lead creative agency on George Weston Foods' crumpet brand, Golden, following a competitive pitch. While Golden is the market leader in crumpets, the brand has commissioned BMF to push its potential for further growth.