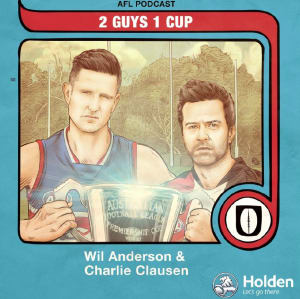 Comedians Wil Anderson and Charlie Clausen have driven an exclusive deal with Holden and podcast platform Whooshkaa to power their popular ‘2 Guys 1 Cup’ podcast all the way to the AFL finals. The agreement capitalises on synergies between Anderson and Clausen’s growing audience and the car manufacturer’s target market, using Whooshkaa’s integration technology. The ‘2 Guys 1 Cup’ podcast began in 2016, featuring the two footy tragics commiserating on the gut-wrenching finals campaigns of their respective teams (Anderson barracks for the Bulldogs, Clausen the Saints). Whooshkaa commercial director Nick Randall said with Australian podcast listeners tuning in to an average of six shows a week, the number of brands exploring partnerships, advertising and content creation is rapidly escalating. See: Gruen TV show returns

Clemenger BBDO Melbourne has hired M&C Saatchi's Jonny Berger as general manager on it Carlton United Breweries account. Berger was group head at M&C where he worked on the Australian launch of Netflix, Woolworths, eBay and Optus' Premier League offering. Berger says: “The Clemenger work for the Brewery is the stuff of legend and it's an incredible partnership - I’m very much looking forward to forging the next chapter.”

Chris Gross, former Fox Sports head of brand and social is taking on the marketing director role at Audible Japan. Gross left Fox Sports earlier this year amid a reshuffle that saw a number of marketing roles axed. Audible is the audio books division of Amazon. It's headed up locally by Matthew Gains, former MD of Edelman, and just launched its first major marketing push here. (see below). Gross also featured in the 2016 edition of The Annual and penned a column about how marketers shouldn't grumble about the challenges they face. Read: A Marketer's Lens: Don't grumble over challenges

Audible is laucnhing its first major campagin in Australia, running on TV, cinema, digital and outdoor, and social. The 'The Grow Your Mind' campaign features well-known literary character Jane Eyre and puts her through couples councelling. The campaign is based on the premise that two thirds of Aussies want to 'grow their mind', but most don't know how. Audible is presenting audiobooks as the answer with a series of 24 books that will help. Audible worked with agencies including With Collective, M2M, Poem and We Are Social.

It's already got Australian customers including Fairfax, Chemist Warehouse, Atlassian, Optus, AGL Energy and Fox Sports, and now campaign experimentation platform Optimizely has revealed its expansion into the Asia Pacific region with the opening of its first Australian base and regional headquarters in Sydney. The new CBD Sydney office is Optimizely’s fifth global location outside of the US. The new APAC office will be led by MD Dan Ross who previously led the customer and sales operations for Optimizely’s headquarters in San Francisco. Optimizely, which has raised a total of US$146 million from investors, allows businesses, to completely personalise websites, mobile apps and connected devices using “statistically-significant data”. Customers can experiment at scale on all parts of their business including marketing, product, engineering and customer service leading to faster and better decisions. The company is actively hiring a full 'go-to-market team' - with roles in Sydney and Melbourne - to support its push into the region and to better accommodate the needs of its growing customer base.