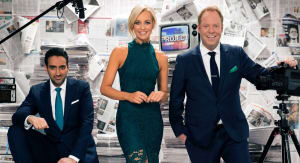 The Project returns to Sundays

Ten's News and current affairs show The Project will now broadcast six nights a week, with the introduction of an hour-long Sunday night edition at 6.30pm from Sunday 27 August. Hosting the Sunday edition of The Project from Ten’s Sydney studio this weekend are panellists Peter Helliar, Dr Chris Brown, Natarsha Belling and Rachel Corbett. A 30-minute Sunday night edition of The Project was broadcast at 6pm during 2012 but was discontinued at the end of that year.

Cummins&Partners Melbourne has been appointed to handle the creative account for McCain Foods Australia. According to a report in B&T, the deal is close to being completed however both parties having not yet signed on the dotted line. The account was previously held by TBWA Melbourne from 2013 until May this year. Prior to that, McCain worked with Ogivly for 25-years before moving on in 2012. AdNews has approached Cummins&Partners and McCain for comment.

Fairfax Media's New Zealand division has been renamed to Stuff and appointed Sinead Boucher as chief executive. Fairfax chief executive Greg Hywood said the renaming recognises Stuff's local brand strength. Boucher was previously Fairfax's group executive editor for four years and prior to that was part of them team which developed the Stuff website. Boucher takes over from Simon Tong who resigned a week before the final decision on the proposed merger between NZME and Fairfax New Zealand which the Commerce Commission declined. Both companies are now challenging its ruling in the High Court.