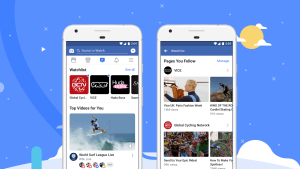 Facebook has rolled out its online video streaming and content creation platform Watch, globally, with commercialisation options also made available to Australian brands and users.

A new type of viewing behaviour

Speaking to AdNews, Simo says Watch is about creating a new place on Facebook to find specific long, and short-form shows and video creators, which encourage users to start conversations with friends, other fans, and even the creators themselves.

"The thing that we have learned is that there is a completely new type of viewing behaviour that really only exists on Facebook right now, which is more active that allows for a community to get more involved with each other and the creators," she says.

Content creators can't monetise content that is less than three minutes, with pre-roll ads being the most widely used by advertisers so far.

A piece of content must also run for longer than a minute before Facebook can insert any further advertising.

Simo says despite Facebook launching its own content through Watch, which reportedly has included shows on budgets from $US 35,000 to $US 250,000, the social media platform does not see itself as an SVOD offering.

"The shows that we have funded make up a very small part of the content that you find on Watch, our own content, for now, remains experimental, developed to learn and understand how people engage with the tools and viewer engagement," Simo says.

"The original intention, and it still holds, is that we are trying to kickstart a new business and ecosystem by showing customers what we think should work on Facebook and what has been working so far."

Content creator pages are also eligible for 'ad breaks' if they have been creating three-minute videos that have generated more than 30,000 one-minute views in total over a two month period and have 10,000 Facebook followers.

Ad Breaks currently include both mid-roll and pre-roll formats as well as image ads directly below the video – and whenever an ad break is shown the publisher or creator earns a share of the resulting revenue.

Publishers and creators can use the ad auto-insertion feature, where Facebook automatically selects the best placement for the ads in their videos, or they can select the potential placements themselves.

According to Facebook, more than 70% of mid-roll ads are viewed to completion.

Simo says that over the past 12 months the platform has also explored a sales strategy that would allow premium publishers the ability to sell their ad space to external clients not already working with Watch.

"There has been interest from traditional content producers such as TV studios and the like, who are now able to upload content directly to the platform," Simo says.

"We have a small test in the US with a couple partners where we have actually given them the right to sell the inventory that they have in ad break but it's in very early stages and we will be assessing whether it is something we will continue to offer."