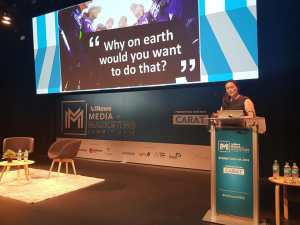 Cricket Australia has high hopes and expectations for the recently signed broadcast deal with Seven and Foxtel, particularly for its women's cricket strategy.

Styles admitted that in the past Cricket Australia has struggled to attract interest from broadcasters to the Women's Big Bash League and other domestic women's games.

"When it comes to the Australian women’s team this is the first time we’ve had a deal that will ensure that every single game they play will be shown, not only on pay TV but on free-to-air as well," Styles said.

"With the WBBL we have just doubled the amount of content we are going to broadcast, that will go across free to air and Fox Sports as well. For women’s sport the whole deal is incredibly positive. The key will be once the long form agreements are done, how do we get in there and work together."

Styles said that while the new deal provided further benefits for women's cricket, the organisation was extremely appreciative of the role that Nine and Ten played in the growth of the sport, with Nine still broadcasting the 2020 World Cup.

From a branding perspective, Styles says the shift away from a corporate social responsibility perspective has allowed women's cricket sides to be included in similar branding deals as the men's teams.

While women's sport has become more a focus, she said it is still not receiving the same exposure as men's sport.

"People need to understand there is a difference of maturity in the market. Sporting organisations need to think about this more as a startup. Because if you take the men’s model across to women’s it won’t work," Styles said.

"What you do see is some brands already choosing to take both, that is happening in the NRL clubs already. I think of our teams like the Sydney Thunder and Melbourne Stars you see Mazda and Optus taking both properties. Instead of brands combining properties I think you’ll see brand going ‘okay this is what I want and it is comprised of men’s and women’s’ then having the conversation around getting the full package."

Keep an eye on #AdNewsMMS for more from last week's event. Get your tickets to the Melbourne Media+Marketing Summit here.