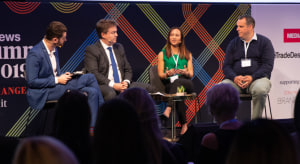 PHD Australia head of trading Joanna Barnes has called on TV networks such as Seven and Ten to improve their signed-in user data offering, as the debate around broadcast video on demand (BVOD) measurement deepens.

Speaking at AdNews Live Melbourne on the future of BVOD, Barnes, who sat on a panel with Nine director of TV sales Richard Hunwick and TVSquared global director of business development Brett Gillett, says major networks need to look at their data offering to bolster the value of BVOD for clients.

"The sign-in data piece is an interesting one. I think that we've got Seven and Ten that don't have sign-in requirements and that's been great for them to build scale in a short amount of time, but moving forward I'd like to see more sign in data, better layoffs to target more efficiently and have less wastage," Barnes says.

"At the moment, BVOD is brought across platforms and that's optimised however it still lacks a holistic view across channels and incremental reach. This is where we as agencies need to see Virtual Australia (VOZ) come into play."

Hunwick confirmed that the launch of VOZ would come at the beginning of November this year. VOZ will incorporate viewing on seven million connected devices plus minute-by-minute actual viewing behaviour of more than 12,000 individuals in OzTAM TV panel homes.

Hunwick says Nine, which does require users to sign in to view its content, is already providing a deeper level of data, which when combined with VOZ will provide a clear and validated picture of who is viewing both linear and catch-up TV.

He says this will go a long way in proving its value as a channel for clients and agencies.

"We've got absolute first-party data on the people who are watching 9Now and you can measure to that. The difference that VOZ will bring is the ability to bring both linear and BVOD together and that's a powerful proposition that doesn't exist anywhere in the world right now," Hunwick says.

Barnes agrees and says the conversations between agencies and networks are moving in the right direction as they now have more clarity around VOZ and the access buyers and traders will have to data inputs and outputs.

However, she says that it's not the complete answer and there is still a lot to be done around educating agencies and clients.

"It's been something that we've recommended, that auditors and procurement are part of that conversation and the education piece.

"It will go a long way to helping us make informed decisions in terms of where the investment sits and yes we can plan campaign reach and cover all channels through source, our operating system, but then to validate it and to prove or show incremental reach holistically across all channels including radio and digital out of home and cinema, the industry tools are not there."

Speaking from an international perspective, Gillett, whose business provides clients with an analytics attribution and optimisation platform, says the BVOD measurement conversation is still "very much in its infancy".

He says the conversation around BVOD shares similarities to the issues raised during the launch and rapid growth of digital and online video.

"If you go back to when digital first started, they went through a similar premise which was it's starting to fracture across channel and I think it's the same journey going on at the moment," Gillett says.

"The difference that you are seeing in BVOD is that, unlike digital video being a new channel of its own, spend is being shifted from linear TV budgets and into what is almost an extension of a channel. However, as measurement improves we may see this change over time."