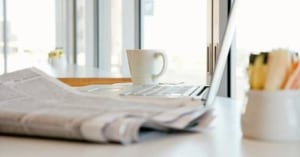 More people read news in print, than on digital, according to the latest Enhanced Media Metrics (emma). Just.

The numbers show 70% of Australians (12.9 million people) read news on digital platforms across mobile devices, tablets or PCs, in May 2017.

The numbers show 13.3 million people or 72% of the population read newspapers in May.

If you're one of the many who prefer reading in print, you should subscribe to the AdNews monthly print edition. A premium, luxiurous read, full of exclusive content that doesn't appear online. The only way to read it is to get a copy. You can subscribe to the print edition or download a digital version of the mag here.

Of those, 2 million readers intend to buy at least one property in the next 12 months and are 19% more likely to buy property than non-readers, according to the data released.

Another 1.2 million intend to get a mortgage in the next 12 months - 11% more likely than non-readers, demonstrating the strength of print media for real estate industry and banking brands.

The Sydney Morning Herald is Australia’s highest-reaching title across all platforms with 5 million, followed by The Daily Telegraph, which reaches 4.56 million readers. The Herald Sun sits at 4.1 million.

In print, New Idea has the highest readership at 2.7 million, followed by PacMags’ Better Homes and gardens at 2.3 million.