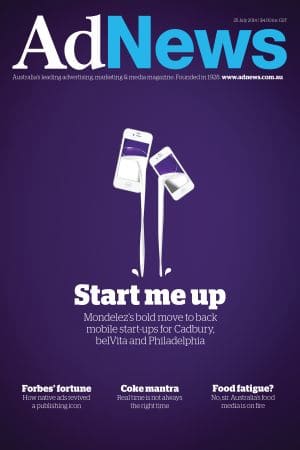 Mondelez marketing units for brands including Cadbury, Philadelphia and belVita have faced off over which tech start-ups they will partner.

The consumer goods giant’s Mobile Futures program has brought 13 tech start-ups into the corporate fold as Mondelez bids to crack mobile marketing and move with the speed and agility not normally associated with such a big beast.

AdNews editor-in-chief Paul McIntyre spent two days “embedded” in the selection process at Mondelez’s Melbourne HQ, where it all got a bit tasty.

“[The brand teams] got passionate about which start-ups should represent their brands. It got really heated at times,” admitted Julian Polachek, Mondelez’s corporate affairs manager.

Find out which start-ups made the cut and what happened after everybody cooled down in today’s print issue of AdNews.  Subscribe here or get it instantly on your iPad.

“Process was pretty straightforward," they said. "We read the background to the article. That often helps. Then we used our brains to think of something. In this case, we recalled those silly apps like the beer drinking one where you use your phone to make it look like you’re having a glass of beer. Cadbury. Glass and a half. Done.”

We owe them a beer app.

In this issue we also asked creatives what wouldn’t they do? Tricky one. Seamus Higgins and Stuart Turner, creative directors of Havas (appearing as one person) said they would “never forget sitting though a global conference call at 10pm on a Friday night, talking about nappies and questioning my very existence and thinking there weren’t enough nappies in the world to mop up the shit being spouted across that table.” Lest we forget.

Meanwhile Forbes honcho Bruce Rogers gives the low down on how native advertising has created a rare beast: rising print (and online) magazine revenues. Big brands are queueing up to pay $75,000 a month for their editorial style ads to roam the Forbes network. It’s all about “editors, contributors and brands writing on the same platform, in the same environment using the same tools.” That new business model has to be the future for publishers, he says, “because sadly the traditional editorial one is not supported by advertisers”.

Marketing editor Rosie Baker caught Coca-Cola’s global head of connections Ivan Pollard at just the right time. He told her the difference between real time and right time, what that means for Coke, and how strong planners are more important than ever.

Elsewhere resident cultural sage Tom Moult channels Frank Lloyd Wright, Edgar Kaufmann and The Hitchhiker’s Guide to the Galaxy to justify writing his column at the last minute. That’s what all the best creatives do for a living is his line and he’s sticking to it. Bram Williams also goes old-school. He wrote his column with a pencil and paper after recurring nightmares about exams. Being analogue in a digital world, and being prepared to stand by outcomes without the safety net of ‘Control Z’, is liberating, he reckons.

Meanwhile, Woolworths has also graced the back pages. Its claims about Jamie’s meals being healthier and cheaper than fast food appear dubious. Kenetic Super and Schweppes ads where people throw mess in each other’s faces are also hauled before the beak.

And in his penultimate column for AdNews, Frank Chung says there is a reason advertising people need Dry July. Get your paper copy, or get it here on your iPad.