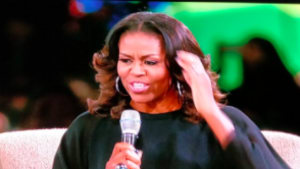 Whether it’s board level, the C-suite, media or the tech industry – or beyond, the huge gender diversity challenges won’t be solved until there’s more women sat at the table, says former First Lady of the US Michelle Obama.

Obama said the equality in the work place change begins with hiring and bringing more voices to the table and “that’s the only way you get there and it takes real work”.

In addressing attendees, which ranged from B2B and B2C media, marketing and sales execs, and the vast majority male, Obama called on those in senior roles to look a what they are doing in their organisation to support good working structures, as well as work place equality.

“I would ask the people in this room to think about creating work structures that actually support healthy families,” she said.

“If we can’t get it done at the federal level then it becomes more important for our leaders, for our CEOs, for the heads of companies to really think critically about how we are making the work place something that not just sustains productivity in a company, but sustains healthy families.

“That is going to take some real work and policies and we need the women who are at the table to start pushing for this stuff.”

Obama said it’s women like her, women who have a point of leverage that are “at the front of this battle for so many women that don’t have the leverage”, that have to help push this conversation.

“I know we have a lot of leaders in this room who do have control over those policies and I’d say take a deep look at it and make sure you have women at the table and you’re trying to figure it out,” Obama added.

In addition to companies hiring more women, improving working structures and women in positions of power and leverage taking the conversation further, Obama said it’s vital to start developing a pool of women – and educating the next generation – to ensure the gender equality issues are tackled and ironed out for future generations.

“I don’t think that a group of men sitting around, alone at a table, are going to get much right,” she said.

*AdNews traveled to Dreamforce as a guest of Salesforce.