Media owners remind CEOs of the importance of advertising 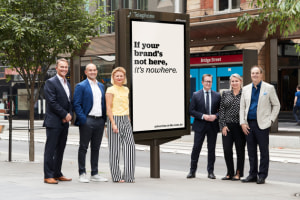 Australian media owners have united to launch a public-facing campaign encouraging brands to increase their advertising, as the market continues to lag.

Created by Publicis Groupe’s Saatchi and Saatchi, it targets CEOs, CFOs and CMOs, reminding them of the importance of advertising for long-term brand building.

“As a result of those economic conditions, we clearly have noticed advertisers across a whole range of categories being more cautious in terms of what they’re doing with their advertising investment,” Stephenson says.

“And really the purpose of this campaign is to remind [brands], especially CEOs and CFOs, of the importance of advertising to long-term business growth.”

Southern Cross Austereo was recently forced to restructure its business, citing a “challenging and difficult” market, reportedly cutting up to 90 roles. 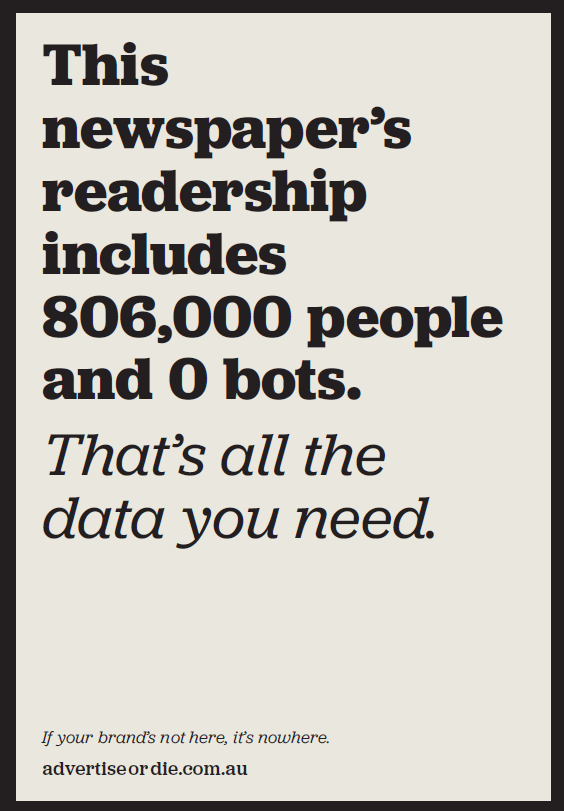 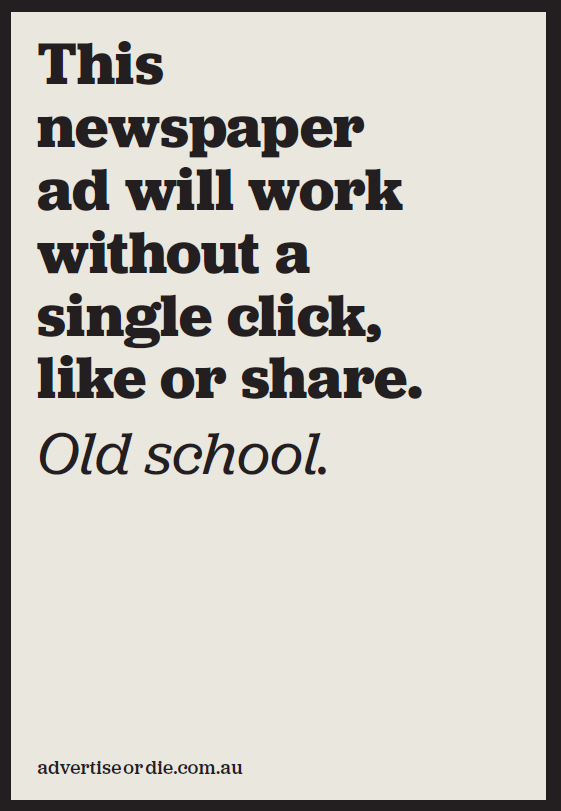 Creatives from the Advertise or Die campaign

The Advertise or Die campaign, with the backing of the main industry bodies such as ThinkTV and Outdoor Media Association, has marketing commentator Mark Ritson as its spokesperson.

With Australia said to be in an advertising recession, Ritson is concerned local marketing budgets could be further tightened in the new year because of the “ropey” mechanism used to set marketing budgets, where most companies estimate what their revenue for the next year will be and apply an “arbitrary” advertising-to-sales ratio to it.

“There’s plenty of problems with that approach,” Ritson says.

“If you already know how much money you’re going to make next year and you’ve already written that figure down, you’ve essentially decided advertising is a cost, not an investment in generating that revenue number.

"It’s also a problem because that percentage figure is then highly arbitrary and that means any business leader can tweak it down, it’s very easy to do in order to put back more money to the bottom line.”

Ritson argues brands should be boosting advertising, not just despite tightening economic conditions but because of them.

“You build up brand equity and mental availability over time and if you pull back or pull out completely from the market for a while, what we’re learning more and more from extensive research is to get back into the game later will cost you significantly more than if you just stayed involved,” he says.

“The second big concern I have is the vast majority of marketers and certainly those that work above marketers are obsessed with ROIs, and bizarrely ROI is not a helpful metric in most advertising situations, because the R that’s being measured is done over too short-term period. We know that short-termism in the Australian marketing is not just bad, it's getting worse.”

Brands should aim to spend 60% or more of their marketing budget into long-term, non-targeted advertising to build brand, Ritson says.

The creative began rolling out yesterday across the media assets of participating owners, including TV, outdoor, news media, radio and premium digital. It’s being labelled as the largest single campaign by Australian media companies, running into February next year with media spend valued in the millions.

“It’s really been extremely tough,” she says. “A lot of that money going into December traditionally has been pulled forward into November.

“So we all had great Novembers but December and January is looking really tough. It’s no longer cyclical, everything’s changed.”