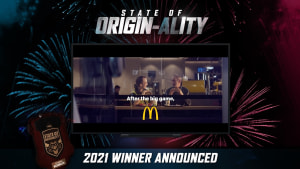 McDonald’s and its agencies DDB and OMD have won Nine’s State of Originality competition.

The challenge to win $1 million of inventory was to take the platform of State of Origin and create unmissable ads that captured the attention of the millions of viewers watching each round of the series.

The winning McDonald’s ad, End of Night, celebrates a part of the footy seldom shown: the period several hours after the big game.

We follow a street sweeper driving around the city late at night as fans, revellers, commentators and Origin greats make their way home with one thing in common: a hunger for Macca’s.

“My sincere congratulations go to McDonald’s and their agencies, DDB and OMD,” says Liana Dubois, Nine’s Director of Powered.

“They took up both the challenge and opportunity in State of Originality to produce some great work that showcases the power of original storytelling, beautifully executed and delivered within the right context.

“I also want to thank our judges, who were all world-class. They’ve helped us to establish State of Originality as a call to arms for brands and agencies who want to be recognised for outstanding, original, well-crafted work.”

McDonald’s Marketing Manager – Brand, Media & Sponsorships, Amanda Nakad: “Congratulations to all involved. This ad is the culmination of a great idea, a well-connected agency village and brilliant execution. It’s a tribute to all the footy fans across the country who include Macca’s in their game day rituals, wherever they may be. Well done to DDB, OMD and Powered.”

DDB Sydney executive creative director Matt Chandler: “What better a criteria to be recognised for than originality? We thought there was real magic in all these little Macca’s moments that happen in the late hours after the footy finishes, and we couldn’t be more chuffed that the judges felt the same way.”

Aaron Miller, OMD’s director of sport partnerships: “SOO continues to deliver audiences at scale reaching over 8 million Australians across the three game series this year, which provided the perfect platform to launch this ad. This win is further credit to the brave direction McDonald’s has taken and the strength of collaboration across the agency village.

The public were also given the opportunity to participate by casting votes via the Wide World of Sports website. Congratulations go to BWS for “Before Convenience” and their agencies M&C Saatchi and Carat for taking home the first Viewer’s Choice Award.

Cindy Gallop: “This competition is called State of Originality because originality is the foundation stone for great advertising. We should all be asking ourselves of every ad we create, is this truly original? Is it innovative? Is it non-derivative, not recycling old tropes and clichés but creatively producing something highly compelling and engaging that we’ve never seen before? That is the standard we set as judges for State of Originality. And it’s the standard our winning ad delivered against. Congratulations, McDonald’s and DDB."

Ant White: “There were only two ads that stood out for me this year, Macca’s and Google. Both were crafted excellently, which is half the challenge. But this award is called State of Originality. And for that, Macca’s just had more of a unique story. If we’re not striving to be original, why will anyone care?”

Russel Howcroft: “Google and Macca’s were up there for me too. Macca’s told a great story with a footy twist and a brilliant soundtrack."

Tara Ford: “As creatives you’re always striving to do something original, but seldom is there a million dollars attached. ‘The State of Originality’ is a great challenge for creatives across Australia to make an ad that lives up to the name."