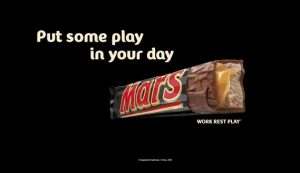 Mars has changed its tagline for the first time since the 1970s, hoping a new campaign from Clemenger BBDO Melbourne will give it a platform for the next 10 to 20 years.

The new campaign from the Melbourne agency pivots away from the traditional 'work, rest, and play' tagline to 'put some play in your day'.

Clemenger is hoping the new tagline will provide a loose framework from which to launch campaigns for the next 10 to 20 years, hoping to replicate the enormous fellow brand Snickers has enjoyed with its “You're not you when you're hungry” campaign.

“It gave us a credible way to express the product benefit for Mars. We can see an infinite number of entertaining executions coming out of this for the next ten to twenty years,” group account director Jennifer Chin said.

The new pivot includes a 15 second TV commercial which will roll out online and on TV, with a second ad already in production.

The first ad showcases a janitor getting their big break on the catwalk after eating a Mars bar.

According to Mars marketing director Matt Graham, the ad is a “move away from the rational”.

“We’ve moved away from the ‘rational’ energy space and injected a lot more fun and creativity, which I think will give it longevity,” he said.

The ad was shot in London with director Ulf Johanssen, who has shot ads for Old Spice, Snickers, Skitytles, Cadbury, and Miller Lite.

“In the past, eating a Mars Bar was a catalyst for a huge uplift in energy. But we’ve all moved on and now that space is owned by energy drinks. The new positioning is about a ‘mental’ uplift – short lived moments that are more fun,” de Wolf said.

“The campaign we are rolling out shows that we are not taking life too seriously.”