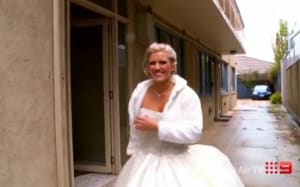 The finale of Married at First Sight managed to beat out the finale of Nine's own main reality format, Reno Rumble, posting 1.29 million viewers in metro areas.

Both Reno Rumble and Married at First Sight wrapped up last night, with Nine able to ride the wave for the whole evening, with the network pulling in a 31.3% share against Seven's 23.9%.

The grand final of Reno Rumble was only the ninth most-watched program for the night with an average of 982,000 viewers in metro areas according to the preliminary overnight OzTAM ratings.

However, the program picked up momentum with the winner announcement bringing in 1.21 million, the third most-watched program for the evening.

Married at First sight was able to maintain the audience and build on it slightly, pulling in the number one program for the night, beating out nearest non-Nine reality program MasterChef by just under 150,000 viewers.

Ten's reality juggernaut pulled in 1.14 million in the face of the Reno Rumble competition, while Seven's main reality offering, House Rules, brought in an average audience of 860,000.

Ten won an audience of 20.3% for the night, almost beaten out by the ABC which had an audience share of 19.2% no the back of its current affairs line-up.