Logies loses out to Seven with lowest ratings to date 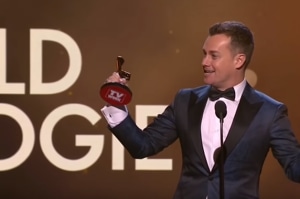 Sunday evening's Logie awards may have been a night for celebration, as the ceremony celebrated its 60th year, but the show failed to top the night, falling behind Seven's House Rules.

The reality home renovation show continued its trend of strong Sunday performances, drawing in a five-city metro audience of 915,000.

The Logies, which celebrates Australia's top personalities and programming, drew an audience of 851,000 across the five city metro overnight.

The ceremony's ratings were its lowest to date, with the red carpet arrivals coverage drawing 11,000 fewer viewers than the main show.

Hosted by Dave Hughes, the comedian and radio host kicked off the show acknowledging the lack of Seven's presence at the event, claiming the entire entourage "showed up in a maxi taxi" and that they couldn't afford more because they gave all the money to "Barnaby Joyce's baby".

Nine's The Block scored a Logie for the most popular reality TV program, while Ten's Have You Been Paying Attention?, which is averaging audiences of more than 850,000 this year, won in the comedy program category.

Ten's MasterChef ratings dropped off on Sunday night, as the show managed to just get more than 700,000.

Below is a breakdown of TV ratings performance, across all the key demographics in commercial share, supplied by Nine.