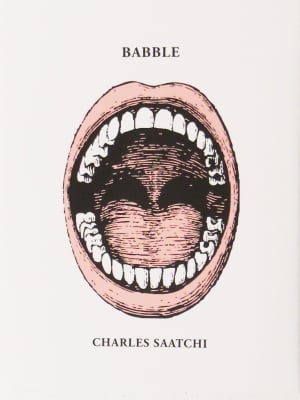 Charles Saatchi was once reported to have claimed that writing ads was the only literary skill he possessed. If that was the case, he must have been unaware of his capacity to write a fresh, provocative and very readable book – a talent which is now revealed in his new collection of essays, Babble, recently published by Booth-Clibborn Editions in London.

In Babble, Saatchi does not talk a great deal about advertising, which is perhaps surprising in the light of his iconic status in the business. Most of the book is a potpourri of his reflections on people and life in general – including some intriguing information and opinions on such diverse subjects as religion, war, politicians, entrepreneurs, marriage, divorce, spoiling children, self-awareness, phobias, depression, smoking, psychiatrists, contemporary clichés, celebrities, movies, art, music, the theatre and literature.

His background as a highly effective copywriter is clearly evident from his colourful and reader-friendly style. There is a most welcome absence of the pretentious words and phraseology which infests so much 21st century writing.

David Ogilvy believed the qualities of a successful copywriter to be “an obsessive curiosity about products, people and advertising”, “a sense of humour” and “a habit of hard work”. In Babble, Charles Saatchi – one of the most successful copywriters ever – offers convincing proof that the observation is an accurate one.

The advertising legend – selected by the BBC as one of the 60 ‘New Elizabethans’ who have most influenced the past 60 years in Britain – displays a curiosity about people which is perceptive, penetrating and challenging. However, he takes neither himself or his views over-seriously, and a quirky sense of humour runs through all of the essays contained in this very entertaining book.

The one chapter devoted entirely to advertising is titled 'Advertising is easy money for school dropouts' (Charles left school at 17 with two GCSE passes), a view later contradicted when he talks about how "brutally hard" he and his brother worked when building their agency – which endorses the last quality identified by Ogilvy.

Although he has been responsible for a lot of very effective and much admired creative work, Charles Saatchi has never mentioned any personal advertising ‘philosophies’ – unlike other creative giants who formed their own agencies, such as David Ogilvy, Mary Wells, Bill Bernbach and Leo Burnett. The closest he ever came to it was probably when he defined advertising as essentially a “simple business”.

In his biography of the Saatchi brothers (The Brothers, Hutchinson 1988), Ivan Fallon states that Charles had “no interest in philosophising about advertisements, replying impatiently to any such attempt: 'Yeah, yeah, you keep your philosophy, just tell me what you are trying to say.'” Fallon also wrote that “his extraordinary ability to see through the jargon and the complexity which inevitably creeps into any industry has been one of the great strengths behind Saatchi”.

Philosophies aside, the chapter on advertising embraces plenty of other viewpoints and information which will be of interest to anybody in advertising, particularly creatives. It also contains valuable tips for anybody hoping to break into the business. Saatchi tells us how he got started himself, and includes some amusing recollections of his early days as a copywriter with Collett Dickenson Pearce in London. He refers to CDP as the cleverest agency in the world at the time, specialising in ads that had the public looking forward to commercial breaks.

His thoughts on why Saatchi and Saatchi was so successful includes the belief that “we got blindingly lucky to get it to grow to be the biggest in the world”. He is modest about his personal contribution to the spectacular growth of the Saatchi agency, claiming that “the only skill I possessed was to string together a few decent ideas a year and occasionally these advertisements appeared to work quite well for our clients”.

Another ingredient in the success formula of the Saatchi agency is identified as a single-minded devotion to keeping clients happy with successful campaigns: “We were maniacally driven to impress our clientele, and if all other businesses cared as much about providing satisfaction as ad agencies, we would have no need for automated customer service helplines everywhere.”

One can only guess at his views on the increasing emphasis on mobile, search and social media. He tells us that his technical skills are restricted to the ability to use a vintage Nokia and to move his finger towards Google – which is just as well, as his first wife claims she only ever saw him reading comics. A lot of the material in the book has been sourced from internet sites, all of which are credited in the back pages.

He is, however, sufficiently technically savvy to be aware of the power of modern technology to bypass commercial breaks – which he sees as interminably long, too frequent, excessively loud and full of corny ads. But on the subject of corny ads, it is interesting that the Saatchi clients he most respected were Procter & Gamble and Mars – two advertising accounts which have never had any use for the extreme creative work for which his agency was famous.

He describes advertising as a “lovely life full of interesting people and a thrill-a-minute atmosphere”. His advice to people hoping to get into the business is not to give up until they get a foot in the door at a top-20 ad agency in London or New York.

In addition to his achievements in advertising, Charles Saatchi also has the distinction of building one of the largest collections of modern art in the world – housed in a 70,000 square-foot gallery in London. So understandably the subject of modern art comes up frequently. A lot of paintings – many of them lesser-known works – enhance the book. So if you share the passion of the author for both art and advertising, the book offers particularly good  value.

Saatchi believes there is a significant lack of sincerity and sensitivity among people in the art world – including the affluent buyers whom he suggests treat expensive paintings as a highly visible symbols of their wealth and status.

He is also questions the knowledge and artistic awareness of critics, and backs up his reservations with the revelation that the Matisse painting, Le Bateau, hung upside down for 47 days in the Museum of Modern Art in New York. Apparently the mistake was not spotted by the entire curatorial staff of the Museum – or by 284 art critics!

In his thoughts on critics, he quotes the Finnish composer Sibelius, who once observed that “there is no city in the world where they have erected a monument to a critic”. He also slams museums for charging admission to art shows, particularly for school parties – reflecting his devotion to fine art and to making it as accessible to as many people as possible.

In addition to his views on the modern art world – which he describes as “hideous” – he also describes his many visits to the studios of some of the greats, including Andy Warhol, Julian Schnabel and Lucian Freud.

Babble can be enjoyed by anyone outside of the advertising community – but if you happen to work in the latter on the creative side, the book is worth the money for one anecdote alone. Saatchi recalls the fable of a blind man seated on a busy city pavement with the cardboard sign, ‘Blind – Please Help’, a message which was generating very few contributions to his collection plate. Noticing this, an advertising writer reversed the sign and rewrote the copy to read, ‘It is a beautiful day. You can see it. I cannot.’ The collection plate was soon overflowing.

If you are ever asked to explain what creative copywriting is all about, I reckon that little story says it all. It is also a useful yardstick to keep at the back of your mind when you are evaluating your own work.

The front cover of Babble is somewhat confronting. It shows the inside of the human mouth with a full-on view of the throat, tongue and teeth. Some may find it offensive, but whatever your reaction, it is impossible to either ignore or forget. Just like a typical Saatchi ad.