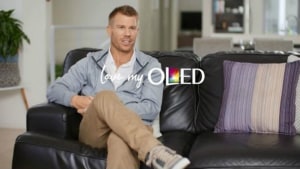 Electronics giant LG has decided against renewing sponsorship of Australian test batsman David Warner after the former vice captain was outed as one of the chief instigators of the ball tampering scandal.

LG said it made the decision on the basis that it only works with ambassadors that share its brand values.

“LG’s current sponsorship of David Warner is in the final weeks and in light of recent events, we have decided not to renew our partnership,” an LG spokesperson said.

“LG Australia will always look to work with ambassadors that share our core brand values and we take these relationships incredibly seriously to ensure we put our customers, employees and stakeholders first.”

Yesterday, Sanitarium removed marketing with former Australian captain Steven Smith on its media assets in the wake of the scandal.

AdNews understands the maker of Weetbix has not yet dropped Smith as a brand ambassador.

A spokesperson told AdNews: “Like the rest of Australia, we are interested in the detail of the Cricket Australia investigation and the action it will take on this matter.”

It’s likely that several brands will assess their sponsorship of individual players implicated in the ball tampering scandal, primarily Smith and Warner.

Sports marketing experts told AdNews earlier this week that although sponsors of Cricket Australia would be mortified, they don’t believe sponsors will abandon the sport.

How Cricket Australia handles the affair will be paramount to appeasing sponsors and other disappointed stakeholders.