Leo Burnett turns up heat on PM for Earth Hour 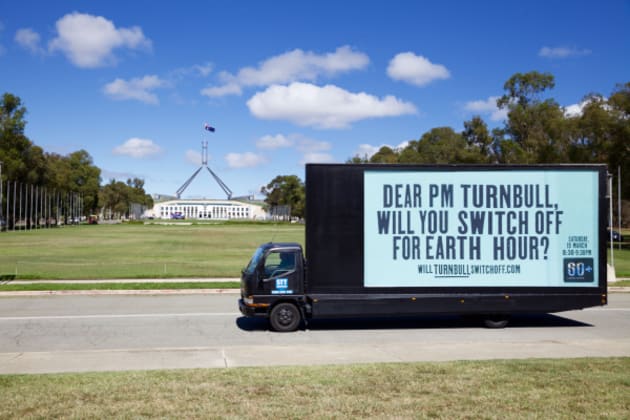 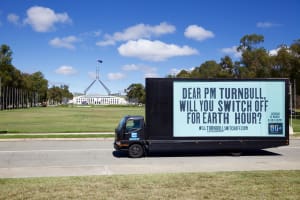 To target the PM, Earth Hour has pitched a mobile billboard outside Parliament House that asks if Turnbull will be switching off this Earth Hour.

The 'Will Prime Minister Turnbull Switch Off?' campaign is spearheaded by the hashtag #IllBeWatching and a dedicated website to encourage the PM to tweet a picture of himself taking part in Earth Hour from 8.30-9.30pm on 19 March.

While the #IllBeWatching element of the campaign may be edging into stalking territory, it is for a good cause with the campaign calling for the PM to switch off, but also switch the country onto renewable energy.

The social and online platforms will allow Aussies to let Turnbull know they'll be tuning in to to see if he switches off for Earth hour, turning up the heat on the PM.

Leo Burnett Sydney joint ECD, Grant McAloon, says: “Together with WWF-Australia, Leo Burnett created Earth Hour almost 10 years ago. Nearly a decade on, what began as a simple idea to galvanise support for the environment and awareness of global warming has grown into the world’s biggest grass roots movement on climate change.

"The campaign encapsulates what Earth Hour is all about. It gives every person the opportunity to take a stand by taking action, from turning off their own lights to encouraging others - especially those in positions of power - to do the same,” McAloon says.

Earth hour manager Samantha Webb says that with a federal election in 2016, Earth hour is a great chance for Australians to keep the momentum going and ensure climate change stays on the government's agenda.

“By letting Malcolm Turnbull know #IllBeWatching, Australians can show their support for strong action on climate change and a switch to renewable energy,” Webb says.

In a separate campaign, Earth Hour launched a social spot that ran across social media, highlighting humanity's power to decide what the Earth will look like for future generations.