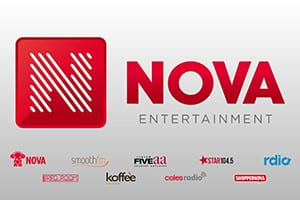 DMG has cut its remaining ties with the Daily Mail Group four years since Lachlan Murdoch bought in. As of today, the company is Nova Entertainment. Chief executive Cathy O'Connor said the firm was going beyond broadcast, flagged an imminent deal to monetise video content and hinted that more partnerships with tech companies around data.

O'Connor said that the rebrand followed four years of work laying the foundations for growth and moving beyond broadcasting while rebuilding its core products. When Murdoch took the initial stake in November 2009 the Nova stations had "plateaued [...] now they are back to number one".

The launch of SmoothFM told its own story and had proved the doubters wrong, O'Connor said. "There's still plenty of upside to come."

But while radio remains at the core, diversification – into streaming music via a joint venture with Rdio, events via Red Room, a subscription TV channel via Foxtel and white label radio stations for the likes of Coles – was the shape of things to come. And now it's about turning the investment into money.

“The immediate future is on making it pay, generating a return, building audiences beyond broadcast across platforms and developing our experiential business and working with more partners to leverage what we have built.”

O'Connor said the one gap in the company's arsenal might be data. “The data space is interesting. Over the next 12 months we will explore that territory."

Broadcasters, with mass audiences and the ability to quickly attract them "make good partners for technology companies".

While the likes of Twitter and Facebook are thrashing out deals with other broadcasters, O'Connor wouldn't be drawn on whether partnerships with the social giants were on the cards. Nova “would look at all opportunities”, she said. But a technology partnership to monetise video content would be announced “in the very near future [...] and there is very high demand around online video”.

Streaming music meanwhile would pay off if Rdio can see off the other big guns coming into what O'Connor admits is becoming a saturated market.

“Australians love technology, look at the penetration of smartphones. It's a tough game with lots of players but we have learnt a lot from the partnership. We see streaming as becoming the preferred mode of accessing music. We can leverage our broadcast assets and cross over with events. And our commercial interest in the business could become a nice investment when the business reaches critical mass.”

In terms of earnings and profit, O'Connor said that Nova this year expected three times EBITDA over that earned when Murdoch acquired the first 50% stake. “That growth trajectory in both revenue and profit will continue to the current month and with growth comes the ability to keep investing. Radio has a very solid future. But that investment is no longer just about the core.”