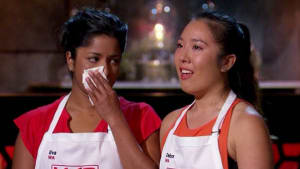 People seemingly prefer the glitz and glamour of the kitchen over the red carpet if the latest ratings are any indication, with My Kitchen Rules dominating Nine's presentation of the Logie Awards last night.

According to the preliminary overnight OzTAM estimates, Seven's flagship reality show brought in 1.67 million viewers as the series starts to build toward its crescendo, with Seven's Sunday news taking out the second spot on the schedule.

Sunday Night's presentation on the Nepalese tragedy also got in 1.02 million viewers, perhaps on the back of controversy surrounding the program.

Network Seven reportedly attempted to hire a helicopter to search for the brother of Packed to the Rafters star Hugh Sheridan, potentially taking away a resource which could have helped the broader rescue effort.

However, the program ended up showing Sheridan and Seven helping with the relief effort after it emerged his brother was safe.

Over on Nine, its presentation of the 57th annual TV Week Logie Awards managed to bring in 971,000 interested punters, with 958,000 tuning in for the arrivals.

Both of these figures are slightly up on last year's numbers.

Tonight, MKR will have its final and Seven will be hoping House Rules can pick up some of the momentum as the three main commercial network once again gear up for a reality shootout.

Nine's Renovation Rumble, Seven's House Rules, and Ten's Masterchef will all go head to head on Tuesday night in a reality shootout for the second time this year.

Earlier in the year, all three networks faced off with reality formats. My Kitchen Rules took the chocolates from The Block, which suffered due to the presence of Ten's I'm a Celebrity … Get Me Out of Here!

Check out the top 20 for yourself below: