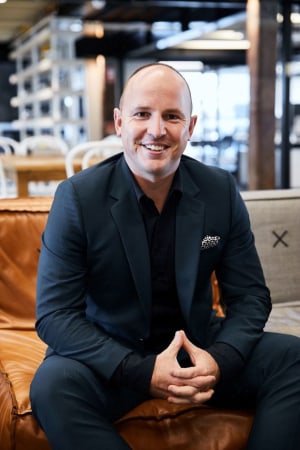 The flight to a full-service model has picked up pace in recent years and hit full speed in the tail end of 2018 with many clients exploring simplified ways of working and uniting their creative and media under one roof.

For CHE Proximity, the flock to full-service has seen the creative shop expand into media buying and planning to now have nearly $50 million in media billings across clients such as RMIT, Latitude Financial Services, Australian Gas Network, AIA Insurance, Cochlear, Danone, Velocity Frequent Flyer and more.

The agency recently won the media for Michael Hill Jewellers from Bohemia and is currently involved in media-only pitches.

With a team of 32 media planners and buyers, CHEP offers buying, planning, technology, data and strategy that integrates into the creative business and supports its infrastructure of 390 staff across Sydney and Melbourne.

Speaking to AdNews, CEO Chris Howatson, who is credited with rebuilding the Clemenger-owned agency from scratch five years ago, said media should be based on insight rather than inventory, which is what led CHEP to pursue media two years ago.

“Traditionally the main function of a media agency was to buy inventory, whether that be an outdoor poster or a cinema spot. What we believe, is the function of media is data management, to provide richer insight to the customer and enrich the whole creative process,” he said.

Howatson chose not to set up its media team as an isolated unit with CHEP, instead embedding it into the planning team under the leadership of chief strategy officer (CSO) David Halter, to ensure it was integrated into the creative process.

Looking at its client base, RMIT is CHEP’s solus media-only client, with the agency handling both creative and media for its other 10 full-service clients.

The agency didn’t always hold the media for these clients, but in some cases, expanded their remit after CHEP provided channel planning as part of its creative work; something Howatson said the team does whether they are the incumbent media agency or not.

“Every presentation we turn up to, we will have an informed view on whether the client should prioritise a broadcast buy or build their brand through precision. More importantly, we will have an informed view of the customer and the likely channel journey they’ll go on because we used that inform our strategic and creative development process,” he said.

"We’re finding some clients might have global alignments with their incumbent media agency, but they’ll let us do the planning, define the audiences, manage the DMP and then instruct the media agency to make the trade. We see in these instances the contracted media agency becomes like a broker in an exchange-style environment.”

Alluding to the ever-present tension between media and creative agencies, Howatson said there can be confusion during a client presentation of who truly owns the idea.

“We’ve overcome that tension. We have one view of the customer, one insight and one idea and all the other friction falls to the side. For the client, it’s easier, the work is better, and it develops more efficiently without multiple competing agendas.”

Outspoken Howatson has driven the transparency conversation in the Australian ad industry and questioned the practices of other media agencies in the past. While the industry is progressing, and he recognises it’s largely a few agencies that taint the entire industry, he still questions if the traditional trading model of some agencies is in the best interest of clients.

One practice he said creates bias within the media planning functionality is the upfront deals that are done between media agency networks and the media owners to secure favourable rates.

“All the upfronts agreements that were made in December dictate how much agencies need to spend in certain channels that have to be delivered on by the end of this year,” he said.

“So, for agencies that practice in this way, their clients have to question if the recommendations are in their best interests or to deliver their buying commitments.”

CHEP isn’t renumerated by the channel it buys, but on head hours, which Howatson believes makes the agency more channel agnostic than some of its larger competitors.

“We charge exactly the same regardless of publisher, bought or owned. So, we're not incentivised to make decisions on channels. You'll see in a lot of agencies they’ll bias private inventory in channel plans because that’s where they make insane mark ups.”

On the flipside, Howatson said there are a number of credible groups in Australia - such as his own -  Omnicom Media Group - and it's disappointing that the industry has become tainted by a few “bad eggs”.

“As an industry, the ones that have been bad haven't really been prosecuted. I don't mean legally prosecuted, but as an industry, we haven't pointed them out and condemned their practices. We almost need that cathartic moment to shed the stigma and then positively move forward.”

Another part of the CHEP model is that the agency puts skin in the game with the clients that are open to a performance-based remuneration model.

“When we control media and message, we go really aggressive on that model. So we'll put quite a lot at risk well and truly beyond our profit margin if we can control both, because then it's truly our problem to deliver,” Howatson said.

Moving into media has not been without its challenges, most especially through the procurement process.

Procurement has questioned CHEP on its pricing during pitches and pointed out that the agency is more expensive than some of its competitors.

“The challenge that we've had is through the procurement process, we look like we're more expensive than a lot of agencies because we show the true cost.”

“What we've done in a few instances with procurement is we've disclosed our staff salaries, our overhead and our profit margin and asked if they consider the multipliers fair. They’ve come back and said, ‘but another agency is 40% cheaper than you’. At that point, we’ve said, ‘they’re either doing it at a loss or they’re making their money elsewhere’.

“When you don't have to make your money in non-transparent ways, then you can just be really upfront, agnostic and just really truthful around what you do.

We even had one client share their current agency’s schedule which we’ve been able to identify where undisclosed margin is being made. It’s always an illuminating conversation.

The other challenge is managing the move into media without it coming at the expense of its creative clout, which so far has not been an issue for the young agency. CHEP won AdNews Agency of the Year in 2018 and took out Media Agency of the Year at both B&T and Mumbrella’s annual award shows. It’s worth noting that last year major media networks boycotted local award shows but are expected to re-enter the award shows this year with CHEP to face a new challenge in the category.

As our industry addresses the challenges of modernisation, the landscape sees creative and media coming together more and more with TBWA recently announcing it's eyeing its slice of the media pie. The real challenge is media now requires significant data, CX and technology skills, so the barriers to entry are far higher than trading scale, Howatson said.

“What I hope is that our industry doesn't give ourselves a disservice and everybody claims media or equally, creative. Maybe a certification process from someone like the Comms Council would be useful to help clients navigate capability and transparency.”

At around $49 million in media buying, CHEP isn’t arguing it’s the biggest, or even the best, but it does argue that it has strategic precision.

“We don’t ever want to be a $490m billing agency, because that’s not the point. Our point isn’t buying power,” he said.

“The sweet spot for us in the market right now is clients that are spending between $10m and $30m in media budget because that puts them in highly competitive market positions. They can’t win by bashing the market, they have to use intelligence to win and that’s where we can help.”

“When Velocity added media to our creative scope, we were able to work on delivering the perfect double - effectiveness and efficiency,” he said.

“Take the transfer bonus campaigns as an example. We’ve done some great creative work to persuade people to move their points (Billion Point Giveaway, Expo, Earnbassadors), but it’s been coupled with smart, precise media thinking that has reduced their working media spend by around 70% over three years, without impacting revenue.”

The brand moved away from “buying blind” and as a result were able to have accurate addressability and an agile investment model with no commitments. Halter said this meant the agency could move budget to where the revenue is, as opposed to asking creative people for an ad to fit a press or TV buy.

“Velocity have set up their own stack and we have complemented their internal capability which gives everyone uncompromised visibility. But most importantly, it allows the creative work to get the channel it deserves,” he said.

“Our biggest win has been balancing owned and paid media together, which has helped Velocity only spend media money on people that won’t convert from email, on-site and SMS.”