Iggy Pop at Cannes: Ad guys are like voodoo priests 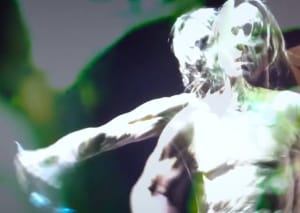 Known for being contrary and outspoken, and rarely wearing a shirt, Iggy Pop is said to have “invented” the stage dive. He’s 69-years-old and still releasing records and touring. He has a dream about being a simple farmer and regrets being so “disruptive” to his parents, but believes you need to have a little disruption in your life to get by. He fears operations and would rather buy himself a “funeral yacht” and party himself to death than go under the knife. He also had a few thoughts for the ad industry.

Both Leonard and the musician arrived on stage wearing suit jackets without shirts, as promised, as part of a hastily whipped together fundraising campaign where Leonard pledged to do it if enough money was raised. The good people of advertising delivered the funds and he delivered the goods.

Iggy Pop has been in a few ads in his time and his music is the soundtrack to many. Asked if he likes advertising, he said he was “fascinated” by it. On marketers though – he’s not such a fan.

“I’ve met a few marketers at the record label … marketers have two faces, three months and about 10 sets of ethics,” he said.

“In my work, I have a god, and the public is my god, and it likes action. They want you to sock it to ‘em. But I suppose in advertising it gets trickier because the company’s god has to be the buying public and in the middle is this voodoo priest called the ad guy. You’ve got to convince the client that you’re going to make it rain. If it does rain, they yeah, it was a great ad, but they will have their own opinion about things, like making a two-minute ad where you don’t show the product.

“I don’t think they need to have the product in ads anymore … people were hiring directors to make short films … you just need to flash the name once and I have feeling it would be good for the product’s reputation.”

Leonard, who was happy to take the title of "voodoo priest" was in agreement and added “I think we all need to transcribe this ad and send it to all our clients right now.”

Advertising and creativity are like art or music and has to come from a place of passion. And without passion, people will continue to skip them.

“You have to give people love … if there’s nothing in what you’re putting out there for which you feel love, or was moving, liberating, or something that quenched your true human desire, then you’re putting it out there just calculating how people are going to react and believing that if they buy this product they will be the most interesting man on the planet. I don’t think that’s going to be worth much in the new world.”

Skipping ads, he said is a “negative vote” for the industry. People are actively voting not to watch ads and as long as people are doing that, things will have to change.

Despite edging closer to being a septuagenarian, Iggy Pop is a firecracker and still going strong. In fact he says he feels better now than he did when he was a teenager.

It led Leonard to reflect on the lack of older people in the ad industry. Under 5% of the industry is over 45, he said. It skews very young indeed – but while gender diversity is constantly talked about, age diversity isn’t.

“To me, when I think of old I think of a process of giving up and the shrinking of the sphere of life. There are necessary tactical things that come up as you live longer. But in my case I’ve gotten a pass because I feel better in general now than I did when I was 18.”

The talk, which was Grey’s annual music session, was titled Do Not Go Gentle, taken from the Dylan Thomas poem. Earlier this week, the agency released a moving video that features Iggy pop delivering the poem. Watch it here.

Iggy Pop - Do Not Go Gentle from Grey London on Vimeo.

Later this week, you can catch AdNews in conversation with Nils Leonard and Grey London CEO Lucy Jameson from Cannes. We'll be posting the podcast shortly.