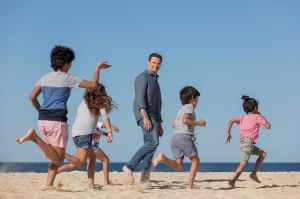 Qantas has released a 60-second spot to cerebrate the true 'spirit of Australia'.

The national airline has joined with its partners – including sports teams, Olympians and Paralympians, and leaders in the arts – in a new video celebrating the importance of diversity to national life.

The video, by Brand+Story agency, opens with actor and Qantas ambassador Hugh Jackman on Maroubra Beach, talking about the Australian spirit and “standing up for a fair go”.

It then moves on to feature a range of talented Australians representing groups that Qantas has worked with, standing together in celebration of inclusion and diversity.

Qantas said the video is part of the national carrier’s long standing support for equality and inclusion – something it has championed through gender diversity (including encouraging more women to train for traditionally male dominated aviation roles), Indigenous reconciliation and support for LGBTI issues.

The video will be screened during the Bledisloe Cup match between Australia v New Zealand on 18 August on Fox Sports, thanks to Rugby Australia, as well as at the stadium to an audience of up to 80,000 people. It will also appear across social media channels for Qantas as well as several of the sporting bodies involved, and screen on board Qantas flights.

Qantas Group executive, Vanessa Hudson, said: “We carry over 50 million people a year from all walks of life. And we have over 30,000 people working at Qantas who represent a cross section of the community. We don’t all think, look or act the same and that’s a huge asset. This video is about celebrating the strength that comes from diversity and why it’s one of the great things about the kind of place Australia is.”

Director Josh Whiteman said they wanted to deliver a message that spoke to the great work Qantas does in promoting equality in Australia.

"Our concept was embraced by some of the biggest names across our cultural landscape - from Hugh Jackman to Bernard Fanning's beautiful rendition of 'Caravan of Love', which shows just how important this message is right now," he said.

"There is something very special about the flying Kangaroo and we see this film as a celebration of the differences that make Australia great.”

Here's who features in the ad:

CEO of the Australian Paralympic Committee, Lynne Anderson, said the committee is passionate about diversity and inclusion.

"We believe in the power of sport to positively lead change in the community. We are proud of our partnership with Qantas and to stand with them as they celebrate equality," she said.