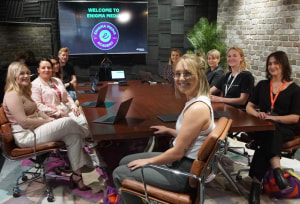 In-house training programs, expanded to regional areas, could be the secret to finding talent.

A contributing factor to the industry’s talent crisis is that international borders have been closed for so long. That means agencies need to look internally.

Justin Ladmore, managing director at Enigma Media, began his 23-year agency career with 10 other recruits in an intense, in-house training program at Universal McCann, a program the global media agency built for them.

“I guess it's a bit of a success story - the program helped us get through the stresses of a media agency - and I'm still friends with those guys and we're all doing great with senior positions in good companies,” Ladmore told AdNews.

“We knew this talent crisis was going to go on for a bit, which led us to bite the bullet and instead of trying to fight it or pay ridiculous salary prices, we developed our Academy to ensure we're training people up.

“Then in 12 months, we've got these amazing media executives - they’re golden nuggets of talent we would never find otherwise in the market we're in.”

Amy Dascanio, general manager, is the “brains” behind the Enigma Media Academy which takes 13 media coordinators through an intense 12 month training program at the Enigma Newcastle head office.

Recruitment for the Academy is a combination of graduates and professionals switching careers, with a focus on regional talent from Newcastle and the Hunter Region to counter what’s going on in metro areas.

The training includes a combination of practical day-to-day work and theory sessions where coordinators learn new skills such as how to use company-wide systems and how to read a media plan.

The Academy coordinators are also challenged with “big-picture, media planning stuff at the same time, which new recruits wouldn’t get to see until maybe like 12 to 18 months into a job. For example, the media planning process, how we respond to a pitch brief and the dashboards and reporting we use,” Dascanio told AdNews.

The coordinators are spread out across the agency’s teams, so they can refine their theoretical skills with hands-on client work.

How to train people who don’t know what a media agency is
“You can explain a position in 1000 different ways to a recruit straight out of uni but until they get into the building, and actually start to do the job, that's when they really understand what they're in for,” Dascanio said.

“We've found in the past that people do a job for six to 12 months, and then they realise ‘Oh, this isn't for me’ - while we don't have an issue with that, it's obviously a big strain on the team and resources to keep doing that.

“I'll be honest, a part of wanting to do the academy was because I wanted to show new recruits really quickly what the scope of a job is going to be - and so if people did drop out, they were dropping out quicker.

“The great thing is the way we've built the program, it won't matter when people drop out, so right now we're back out trying to hire again, because we did have some people fall out.

“And it doesn't matter when these new people start, because we just start the Academy again for the newbies, while the people who’ve already started will continue to roll on until their 12 months.

“It's been a really great learning for us, as we ask the drop outs what they didn’t like and that enables us then to refine how we interview and look for new talent moving forward.”

“What we're doing is trying to find what recruits instantly gravitate to, because then we can understand if we actually shift the team and the structure to suit a certain skill set that enables us to enhance that coordinator in a different way.

“It's about finding talent, but then putting them in the right places.”

Smaller agencies have a leg up
“While the big agencies have got a lot more training at their fingertips, small agencies should also look into starting their own training programs to retain talent and keep people interested in the industry.

“There is so much collateral already out there for small agencies to start their own programs.

“In these small businesses, there are smart people who have done all the big agency stuff already so I think it is easy for them to kind of bring people on and teach them in their own ways.

“Because, you know [as smaller agencies] we're a bit more nimble than some of the bigger guys, and we can be more flexible."

The agency has leaned on the Independent Media Agencies Australia (IMAA), IAB, and its media partners to help with the training content to develop the bespoke in-house training program and help Enigma keep connected to the “Sydney world”.

Enigma encourages other agencies looking to also start their own in-house training programs to lean on IMAA for support.

“I want people to know that they don't have to go to Sydney. I was born and raised in Newcastle and I went to the University in Bathurst to do my advertising degree, but then I went straight to Sydney, and I would have loved an opportunity to have built my career here.

“I think that's something unique,, that these guys are coming out of uni now, and they don't have to go to Sydney to be part of our industry or get that ‘good job’ experience that's predominantly been in Metro capital cities.

“Ultimately what we want to build eventually, from Newcastle, is that community and pipeline so that job seekers don't have to move to Sydney.