How Mercedes Benz Vans is breaking masculine stereotyping in advertising 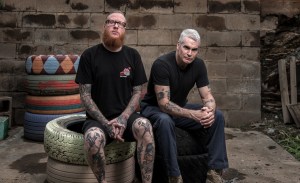 Mercedez-Bens Vans didn't create a TV ad for the launch of its first X-Class ute because it believes the target audience responds better to other forms of marketing, marketing manager Katherine Gracey says.

TV still plays a role in the campaign through a one-hour documentary that will air on male-skewed TV channel One, but the brand has moved away from doing 30-second spots.

The campaign features American punk rocker Henry Rollins on a road trip across the country to gain an understanding of the Australian perception of 'toughness'.

“You've got find cut through, you have to find a way of reaching people, you've got Netflix and Stan with subscription television through the roof," Gracey says.

“So what you could've gone out with, within a typically good TV campaign, is now people watching Netflix or looking at their phones during the ads or YouTube and social media.”

Created in partnership with The Royals, 'Tough Conversations' is designed to challenge the stereotype of 'toughness' in the ute market.

Mercedes-Benz Vans will deliver it through a podcast series, radio partnership, eDMs, social and online content and a one-hour documentary airing in April.

“It allowed us to play in a space that we have never played in before and where we wanted to see just what we could do and also really have what was a full integrated campaign hitting channels that were really really popular with everyday Australians,” Gracey adds.

Gracey says Rollins exterior and punk rock history leaves some audiences forgetting that he is now established as a social commentator.

“We like the contradiction in him and what people would assume him to be. Unexpected, that is what we wanted to do with this campaign. It could have been very easy for us to go out in a traditional way in speaking to a ute audience," Gracey says.

“That's why with this launch, we have had the fully integrated campaign that allows people to hear an ad on radio, see a digital banner on Carsales, visit a website, listen to a podcast, view content on social channel, register interest on our site and then we wrap that up with a documentary at the end.”

As part of the campaign, the brand took a closer look at the current ute market in Australia. It found that the 'standard' ute consumer – men aged 35-54 – prefer messaging to be delivered in a specific way for it to resonate.

“They don't want to be spoken to in the typical way in sometimes the ways that a lot of advertisers do, whether it is automotive or not," Gracey adds.

“The traditional type or research and demographic data that comes out of this told us 'talk to us differently, not in that stereotypical way' and I feel like we've achieved that.”

Mercedes-Benz just handed its global creative account to Publicis following a competitive pitch. The Royals, which have been working with Mercedes-Benz Vans since 2016, are not impacted by the global shake-up.