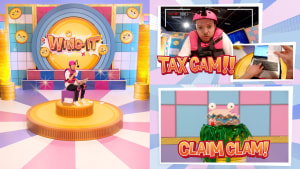 H&R Block is encouraging people to ‘Don’t wing it, Ka-ching it’ in its annual tax campaign from The Works, part of Capgemini.

The integrated campaign comes as millions of Australians go to complete their tax returns online with the potential of missing deducations in the process.

Drawing inspiration from the sometimes bizarre and offbeat Japanese game shows, the commercial sets out to dramatise how H&R Block can take away the stressful and often confusing process of completing tax returns, while maximising deductions to ensure people get the maximum refund they are entitled to.

The fictitious ‘Wing It’ game show provides the backdrop for an unsuspecting taxpayer trying to complete his return on the government portal, at the same time as being confronted with a series of terrifying obstacles such as the ‘Deducti-balls’, ‘Adjusted net income’ and ‘Capital gains canon’.

“This campaign is something of a departure to traditional tax advertising," The Works creative partner Damian Pincus says.

"We wanted to bring a sense of fun and excitement into the work and clearly show that while doing your own tax online is a tempting option, it’s not worth winging it and missing out on money you’re entitled to.”

The campaign includes a 30-second commercial with a 15-second cut down, radio, digital, OOH and an Instagram-based social game with media by PHD and PR from Candid Communications.

“Research shows a quarter of Aussies will make mistakes while doing their tax return online, and 60 percent feel unsure of the entitlements they can claim," H&R Block marketing and digital innovations director Louise Cummins says.

"It takes years of training to become a tax professional, so we shouldn’t play games and think we know better when it comes to doing our taxes.”