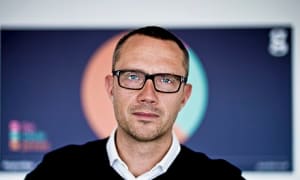 Guardian honcho David Pemsel has rubbished the paywall model as “a system that is broken” and suggests legacy media clinging to the past are doomed to failure.

The Guardian will never deploy a paywall, Pemsel told AdNews. Instead, it is pinning its hopes on "patrons" voluntarily opening their wallets to fund “independent journalism.”

Pemsel, promoted to deputy chief executive of the global news organisation late last year, was in town for the Agency Symposium being held in the Hunter Valley today.

The organisation's UK branch launched the Guardian Membership scheme last week. Prices under the scheme vary, starting at “friend” membership, which is free but requires members to disclose some of their data, to “patron” which is priced at £60 a month ($107).

While that membership tier gives discounted entry to Guardian events and “backstage” access to newsroom operations, that looks steep compared to Australian news site subscription prices and it is not clear what price point will be set locally.

Australian readers are able to sign up to the scheme now, but locally-based events will not be rolled-out until at least 2015. Pemsel said the soft launch is the result of The Guardian's relatively new status in the media landscape.

Whether the high-price of the membership scheme might be ambitious if applied locally, Pemsel said The Guardian was looking into pricing structures, but said similar levels would be set around the world. He said the clue was in the name, "patron."

“If you just did the maths and said ‘I pay this and get that’ it won’t add up,” Pemsel said. “It is there to be able to satisfy a need that people have had to be able to contribute to The Guardian for a bigger purpose of what we stand for and what it is that we do.”

Pemsel said, less than 18 months in, the digital-only Australian operation was already ahead of revenue and audience targets, although Pemsel would not be drawn on what those benchmarks were. Nielsen data for august suggests the Guardian has a unique audience of 1.95 million.

Pemsel suggested that media outlets that refused to move to open digital models and looked to pay walls to diversify revenue streams were being left behind by new players. Pemsel added that the organisations that “will win” are those that encourage audience collaboration, and that model “is the future of news.”

Those “clinging to old business models that are so inevitably going to go, or are already broken, are organisations answering to shareholders that everything is going to be fine. And the point is, everything is fine, its just the audience is somewhere else,” Pemsel said.

“We got into that stuff very early and what I see here is that our nearest competitors are slow.”

Have something to say? Send us your comments using the form below or contact the writer at rachaelmicallef@yaffa.com.au