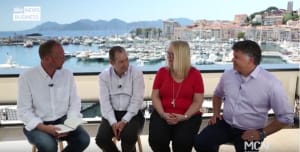 This daily panel show in Cannes is produced by MCN and News Corp. To see the last video, go here.

GroupM’s global digital chief Rob Norman believes the rise to prominence of Snapchat and Amazon could end the duopoly of web giants Google and Facebook.

Speaking on a panel session from Cannes produced by MCN and News Corp, Norman said client conversations during the week had repeatedly focused on Facebook and Google’s inexorable rise. But he thinks they may not have it all their own way for long.

“When you look at the user growth of Snapchat and the way Amazon is developing as a business, it is not really true that there is a duopoly developing in the way that people think,” said Norman. “There is a significant chance it is becoming more competitive than it has been in the last few years.”

If the top table is becoming more competitive for platform players, ad agencies face similar pressures. But Norman suggested that WPP and other heavyweights could handle the new breed eyeing their lunch.

PwC has invested significant resource to expand beyond accountancy and consultancy and into media. Fellow panellist Mike McGrath, managing partner and CMO, PwC Australia, admitted that the firm “saw the [advertising and creative] industry as very attractive.”

Norman quipped that creativity was “already very popular in accounting”, but underlined the challenge PwC might face in gaining traction.

But he suggested there was “room for both to coexist” and that competition would drive innovation and outcomes for clients.

Kmart’s general manager of marketing, Michele Teague, agreed. She outlined how blending arts, science and business outcomes had most impressed jurors on the Creative Effectiveness category at Cannes, of which she was one.

“I loved The Economist’s work, we awarded it very highly,” said Teague. The work, Raising Eyebrows and Subscriptions, was one of two gold Lions awarded in the category.

“They identified a younger segment and through social media listening defined their characteristics, what they were interested in - and used programmatic [technology] to reach them. But they combined good ‘old fashioned’ copywriting to write headlines in real-time relevant to news feeds,” she said. “It was hugely successful.”

Watch the video above to find out what else Norman, McGrath and Teague see coming out of Cannes.